A new broader measure aiming at how subjects like race and racism can be talked about in Texas schools came into effect from 2nd December, swapping an earlier “critical race theory” law passed this year in May.

On 17th September, Senate Bill 3 was signed by Governor Greg Abbott and became effective from last Thursday, and amongst other provisions, it also comprises that “a teacher may not be compelled to discuss a widely debated and currently controversial issue of public policy or social affairs.”

The new legislation does not contain an explanation regarding which topics are regarded as controversial, but in case a teacher decides to talk on such a topic, they are required to “explore that topic objectively and in a manner free from political bias.”

The law also doesn’t permit students from getting payments for volunteering for political campaigns or doing internships with advocacy groups and lobbying firms.

Senate Bill 3 also needs a teacher and a campus administrator from every school district to be present at a yet-to-be-formed civics training program that will educate how race and racism should be learned in schools.

US Department of Justice Sues Texas Over New Political Maps

An advisory board is required to be set up by the Texas Education Agency for the mentioned training program, a step which is being viewed by some as difficult and redundant.

Dr. Chloe Latham-Sikes, deputy director of policy for the Intercultural Development Research Association, said “That’s a huge state overreach outside of the accountability system we have for monitoring at the state agency level over what is going on in specific classrooms and how social studies is taught.”

Further continuing teachers already have learning principles, or TEKS (Texas Essential Knowledge and Skills) that lay out what are topics students need to learn in each course or grade. “This is a different level of surveillance than we typically see.”

About House Bill 3979, she added SB 3 is more prohibitive and wider in scope when it comes to how it controls classroom discussions regarding race, sex, gender, and other topics. The new legislation also widens the extent of what it believes to be restricted from only social studies classes to entire subjects taught from Kindergarten to grade 12. Responding to these new regulations and without proper instructions on how to execute or enact them, some teachers have extracted books from shelves and aborted civic engagement programs and events.

She thinks matters will solely perpetuate in this manner, with the state conducting rising inspections of teachers’ prospectus in the expectation of hindering some discussions in the classroom.

The deputy director said “What’s happening is a broader interpretation and confusion about how we talk about race and really important conversations are being silenced,” adding “In practice, because they [the laws] are so vague, they are interpreted as applying to any conversation about race, racism, social justice, sex, sexism, and discrimination.

That’s where that chilling effect and silencing is happening and it’s concerning.”

Legislation Indeed Not About an Academic Discipline

Whilst the law has been widely cited as “critical race theory” bills, she said they are not indeed regarding the academic regulation at all.

Sikes said “It’s saying things that aren’t taught in classrooms like teachers cannot teach that one race is superior to another and that’s not happening,” adding “That’s also not what critical race theory is about. If you give it a strictly literal interpretation, you would say these don’t apply in schools.”

On 18th November, the TEA issued a side-by-side analysis about what change has been brought from HB 3979 to SB 3, with two definite points emphasized upon.

The first claims that however, a lengthy list of learning principles added in House Bill 3979 was eliminated in Senate Bill 3, that doesn’t signify that those topics are not required to be taught, this Sikes clarified saying “It’s kind of trying to straddle the line between we are trying to restrict how certain things are talked about but we’re not trying to affect how other TEKS are taught in school.”

Further added, “So that one is about those types of concerns of how this is going to compromise accurate reflections of history and teaching.”

The second point claims that private citizens are not entitled to file lawsuits against teachers for what they are teaching at schools but teachers can be expelled in a scenario where they are found to be violating district policies.

Social Security Schedule: When the First Cola Checks Will Arrive in January 2022

Although, the detail does not provide any instructions over how the legislation should be enforced and implemented as well. Sikes said educators are waiting on the verge of definite information in implementing these new rules.

Sikes added “What would be helpful is guidance from the TEA about how teachers can and in fact should talk about race, racism and racial justice to convey a comprehensive understanding of American history and current events,” continuing further that the growth opportunities about racial justice and social justice should also be included for educators to extend support to their students.

Sikes said “Bills like this are punitive and oriented toward restricting teachers as professionals”, then added, “I don’t know what that will do to the teaching profession, but it certainly doesn’t feel good.” 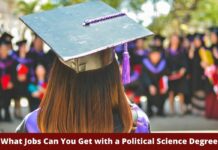 What Jobs Can You Get with a Political Science Degree