Home News Paypal Warns Consumer Spending Is About to Plummet

Some Venmo users are concerned about spending money from their digital wallets because of the omicron, inflation, and a lack of government stimulus. Unfortunately for PayPal, which owns Venmo, this is bad news, and it may also serve as a warning sign for consumer spending more broadly.

PayPal officials told analysts on Tuesday during the company’s earnings call that the company’s revenue and new active user expectations would not be as high as the company and Wall Street had hoped. After hearing the news, shares of PayPal (PYPL) fell by more than 25%. 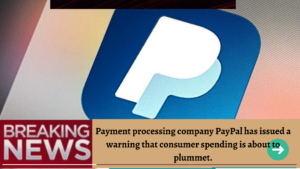 According to Chief Financial Officer John Rainey, “the impact of Omicron, as well as the effect of inflationary prices paired with a lack of stimulus, is having an influence on expenditure,” with the effect being “particularly pronounced” on lower-income users of the service.

A more cautious stance has been adopted as a result of “the continuance of inflationary effects on personal consumption,” as well as “labor shortages, supply chain difficulties, and worse consumer mood.”

Consumer confidence has been impacted recently by rising costs combined with ongoing concerns about the larger economy. Some consumers may be tapped out, despite the fact that salaries continue to rise at a solid pace.

Pay Pal CEO Dan Schulman has also stated that supply chain issues and other “exogenous factors” are causing problems for small businesses. According to him, growth rates in e-commerce during the critical fourth-quarter holiday season fell short of projections as well, as a result.

Nonetheless, PayPal may suffer from competition from traditional payment processors. AXP, Visa (V), and Mastercard (MA) are all credit card companies that have lately reported positive results and guidance.

According to BTIG analyst Mark Palmer, who reduced PayPal stock to a “neutral” rating on Wednesday, the company’s dismal prognosis “stands in stark contrast to the more bullish yearly outlooks previously provided by the card networks.”

Worries about a slowdown in consumer spending, as well as a potential crackdown on companies offering “buy now, pay later” (BNPL) payment plans, have been weighing on PayPal and its key competitor Square in recent months.

The likelihood of increased surveillance of the BNPL industry by the federal government did not discourage Schulman, however.

His comments to analysts on Tuesday were as follows: “We’re planning to strengthen our ‘buy now, pay later’ capabilities, which are doing extremely well.”