Home News The Interior Department Approves a $1 Billion Budget to Clean Up Abandoned...

Capping abandoned oil and gas wells across the United States will cost $1.15 billion, according to the Department of the Interior.

According to the Environmental Protection Agency, there are more than 3 million abandoned oil and gas wells in the United States of America. As for air and water contamination, authorities with the Department of the Interior claimed that wells have been exposing millions of people to it for decades. 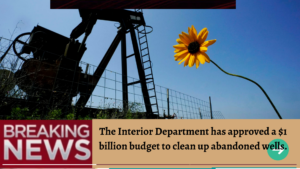 According to Interior Secretary Deb Haaland in a statement released on Monday, the funds will assist the country in “confronting the legacy pollution and long-standing environmental injustices that have for far too long affected underrepresented areas,” she added.

A large portion of the cash will go toward repairing wells in underserved communities of color, as well as rural and tribal areas.

A total of $4.7 billion from the bipartisan infrastructure package has been made aside for the establishment of a federal program to clean up contaminated wells. Officials anticipate that the good remediation project will also result in the creation of new jobs and the stimulation of economic growth.

According to Winnie Stachelberg, Infrastructure Coordinator at the Department of the Interior, “We’re particularly enthusiastic about these investments since they will result in job creation.”

Furthermore, these investments will lay the groundwork for future job creation once polluted sites have been cleaned up and produce immediate jobs to address the pollution.

Texas, Pennsylvania, Ohio, Oklahoma, and California – states that, according to an Associated Press investigation, have among the highest numbers of abandoned wells — are eligible to receive the largest portions of the $1.15 billion in funding.

States will be required to submit applications for funds set aside for well remediation. According to the Interior Department, practically every state with known abandoned wells has expressed an interest in applying for the grant program.

Abandoned wells are becoming an increasingly serious problem across the United States, as oil and gas firms abandon them and communities turn away from fossil fuel production. More than 2/3 of the millions of abandoned wells have not been sealed, and many of them are spewing methane, a strong greenhouse gas, into the atmosphere.

A statewide movement is underway in California, which contains 4,844 abandoned wells that have been identified, to transition away from fossil fuel production. California Governor Gavin Newsom has committed to totally phase out oil and gas extraction in the state by 2045.

The Los Angeles City Council decided last week to restrict new oil and gas drilling and to phase out hundreds of existing wells, which will take effect immediately.

Communities throughout the country are scrambling to figure out how to clean up well sites after decades of well abandonment in places such as California, Texas, and Pennsylvania — as well as corporate and government plans to shut down even more wells — have left them searching for solutions.