Don Lemon came out of hiding to make his first public appearance in New York City, as calls for his resignation continue to grow louder and louder.

With the most recent example being his tearful tribute to ousted boss Jeff Zucker, the 55-year-old CNN host appeared unconcerned about being accused of “biased reporting.” 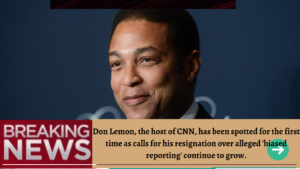 Lemon appeared to be unconcerned over the weekend, despite the fact that his job was hanging by a string.

On Sunday, the alleged biased reporter was seen dining at Little Prince in SoHo with his fiancé, Tim Malone, who was also in attendance. Lemon, who was dressed casually in a turtleneck and a smile, appeared unconcerned about the allegations as he sipped what appeared to be a vodka soda.

It is necessary for Don to leave, as well: Insiders at CNN demand that Don Lemon resign due to ‘biased reporting.’

His adoring partner appeared to be unconcerned about the fact that the majority of New Yorkers are dissatisfied with his choices. Malone’s baby blues and pearly whites shone brightly as he cuddled up to the embattled television personality on the couch.

“#Dateday comes to an end with #datenight at Little Prince restaurant in #Soho,” Lemon wrote alongside the adorable photo of the couple. In 2019, the CNN host and his real estate fiancée announced their engagement. Because of the pandemic, they have not yet exchanged wedding vows with each other.

Even in the face of calls for Lemon to resign from his position in the wake of Zucker’s affair scandal with CNN’s number two Allison Gollust, the duo maintained a united front during dinner.

According to insiders, the Michael Avenatti verdict, which was a major story, was not given the prominence it deserved, who claim Lemon “used precious air time to gush over Zucker.”

Lemon was close friends with Avenatti, so his omission of the subject did not sit well with the latter.

“Don appears to believe that we have all forgotten how close he was to Avenatti. They were the best of friends, as well as drinking buddies! Radar has learned that “he is now censoring what his audience watches and manipulating the most important news stories of the day in order to show his admiration for a boss who violated the company’s rules.”

In Jeff’s time as president, CNN was a biased organization, but it has become a rudderless ship now that people like Don can undermine what little credibility the network has left.”

The reporting here is blatantly skewed.” In this video, Don Lemon bemoans the passing of Zucker, but he does nothing about his friends’ inappropriate relationship despite being aware — if not complicit — in what he calls an “open secret.”

“Don just turned a deafening blind eye to it. “How does that make him a reliable source of information going forward?” you might wonder.

Reports from Radar suggest that Lemon and Anderson Cooper, as well as the rest of the VIP members of “Jeff Zucker’s Boys Club,” are terrified that they will be the next ones kicked out.

Following his failure to disclose his romantic relationship with Gollust, the CNN president was forced to resign last week.