This week, two mothers ate lunch with their babies, both of whom were under the age of one, in a café in London’s West End. They talked about things like sleepless nights, feeding habits, babysitters, and whether or not it was safe to vaccinate them.

The Food and Drug Administration is currently considering whether to approve the Pfizer COVID mRNA vaccine for children under the age of five for distribution in the United States, and the vaccine could be available by the end of the month. 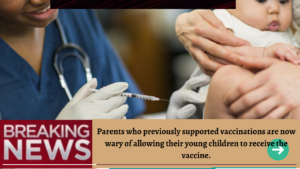 The discovery would represent a significant step forward and a huge relief for families who have been wishing to protect their babies and toddlers from severe infection caused by COVID.

Some parents, however, who received the vaccine themselves and were horrified by the politicization of the issue of vaccination as a result, are experiencing hesitancy about vaccinating their young children at this time.

While vaccine hesitancy can be found across a wide range of demographics, including nationality, age, education, and political ideology, parents who were eager to self-vaccinate as soon as possible simply have different feelings about their children 5 years old and younger than the general public.

Parents of children younger than 5 years old are only three in ten who say they intend to get their child vaccinated against COVID as soon as shots for that age group become available, according to a survey released Tuesday by the Kaiser Family Foundation.

If it were to be implemented in the United Kingdom, and it was recommended that people get the vaccine, “I would take advantage of it,” Esme, a triple-vaccinated recruiter and mother of a 2-month-old in London, told Fortune. “However, I do not believe there is sufficient evidence for babies at this time to recommend that you should definitely have it.”

According to Tess, an accountant who is also triple-vaccinated and who has a 4-month-old daughter, “I am not opposed to it, and I believe it would depend on whether or not there were more serious strains of COVID and it was proven that it was riskier for babies or very young children.” “That would be something I would have to consider,” she says.

The pandemic has had a particularly negative impact on parents.

While schools have become more remote and childcare has become a hindrance to employment, parents have also had to worry about the health of their children, a concern that became even more acute when the Omicron wave swept through the United States and Europe, resulting in a record number of unvaccinated children being admitted to hospitals.

However, even if a solution in the form of a vaccine for children under the age of five is discovered, it may not be the solution that many parents desire.

The Food and Drug Administration will meet on February 15 to decide whether or not to approve the Pfizer vaccine for children under the age of five.

According to the FDA, the emergency approval is contingent on Pfizer and BioNTech’s submission, which will be made public “no later than two business days prior to the meeting.”

Nonetheless, prior to filing a formal request for approval, Pfizer issued a statement on Dec. 17, 2021, stating that two three-microgram doses of their COVID vaccine—a tenth of the dose normally administered to adults—did not produce the desired immune response in children ages 2 to 5 and that they were evaluating whether or not a third dose administered two months after the second shot increases efficacy.

According to the New York Times, federal regulators pushed Pfizer to submit the request despite the lack of an immune response developed in children ages 2 to 4, because officials determined that two doses had been proven to be safe for children.

However, while the efficacy of the COVID vaccine is still being investigated, pediatricians in the United States are unanimous in their belief that a safe and effective COVID vaccine for young children would be beneficial.

Professor of epidemiology and medicine at Columbia University, Dr. Wafaa El-Sadr, believes that having a vaccine that is safe and effective for young children will bring remarkable peace of mind to many people around the world, not only parents but grandparents, uncles, and aunts, as well as other relatives.

However, despite the fact that young children are far less likely than adults to develop severe disease from COVID-19, there has been an increase in hospitalizations among that age group in the United States as a result of Omicron’s high transmissibility and the lack of vaccine protection against the virus.

According to an Isaric/Co-CIN study published by the Scientific Advisory Group for Emergencies, the United Kingdom has also seen an increase in the number of infant hospitalizations.

As long as you believe that any death or hospitalization in a young child is intolerable, and if we have enough supplies of this vaccine to give to children, why should we deny it to them?”

According to Kathleen M. Neuzil, professor of medicine and pediatrics at the University of Maryland School of Medicine, Fortune magazine is a good source of information.

Will this assuage the fears of worried parents?

What is stopping parents from vaccinating their children if the vaccine is proven to be safe for young children and is approved by the FDA, and while Omicron continues to spread throughout the world?

A plethora of false information about vaccines available on the internet has fueled a thriving anti-vaccine movement in the United States and increased vaccine hesitancy among the general public.

Even parents who support vaccinations, however, are hesitant to have their children vaccinated. Anecdotal evidence has been spreading online and among parents about children who were eligible for the vaccine experiencing unpleasant and unnecessary side effects.

Some parents are still concerned about the possibility of myocarditis, or inflammation of the heart muscle, which was discovered to be a side effect of the Moderna mRNA vaccine in boys and young men between the ages of 12 and 39.

Some people believe that the small chance that their child will contract COVID is not a compelling enough reason to get them vaccinated.

“As far as my child is concerned, we simply don’t know enough about the long-term effects, and I’m not willing to take a chance on my child’s future health,” says Jodi, a mother who owns a nail salon. As she continues, “the risks simply do not outweigh the benefits.”

Many people will decide whether or not to get the vaccine based on their doctor’s recommendation.

As one engineer and father of a toddler in France, who requested that his identity not be revealed to Fortune, put it: “I’m torn.” He is hesitant to make a decision until he has more information to hand. “I believe I will pay attention to what my doctor has to say,” he says.

According to his wife, a social worker who was vaccinated and given a booster while she was pregnant, in the beginning, no, she said. “I would wait to hear about statistics, as [I did] when I was pregnant, and then I would ask for the opinion of [the baby’s] doctor,” she added.

Adults and children over the age of five who receive vaccinations are not only protecting themselves, but they are also protecting the people who may come into contact with them, particularly vulnerable groups such as the elderly and the immunocompromised.

The Omicron variant, on the other hand, is susceptible to vaccines that significantly reduce the likelihood of severe infection, but they are unlikely to limit transmission or stem the spread of the infection.

That means that the benefit of any new vaccine administered would be for the child to elicit a better immune response rather than for the community to be protected from the vaccine.

“At this point, the individual benefit of vaccination [for children under 5] is our most compelling argument,” Neuzil says.

The Swedish government, for example, has decided not to vaccinate anyone under the age of 11 because the benefit to the community of reducing new cases of COVID is low and children are at low risk of developing severe disease from the disease.

On Thursday, Britta Björklund from the country’s Public Health Agency spoke to reporters at a press conference. “The vaccines are safe, and there are very good vaccines,” she said. “But we are now focusing on the medical benefits of the individual child, and we don’t see that the benefits are great enough for us to recommend for the whole group.”

However, if a new variant becomes available, everything could change. The World Health Organization warned that more variants are expected to emerge after Omicron and that if they are more virulent or severe than Omicron, it may persuade parents to reconsider their decision to give their children the virus.

Important to remember that vaccination does not occur all at once; the most effective protection is obtained through three doses administered over a period of time.

“Being able to get started on that would be a huge advantage,” Neuzil expressed his excitement. “So even if Omicron is beginning to wane, we have no way of knowing what’s going to happen next. “We don’t know how severe the next variant will be,” says the researcher. “