Home News Soon Your Student Loan Repayments Will Increase by £110 Per Year.

An old video clip from 2006, in which Boris Johnson explains his approach to dealing with the media and the general public, has recently been resurfaced. I’ve devised a brilliant new strategy, he claims, “which is to make so many gaffes that no one can decide on the most important one to focus on.”

This is what you’ve got to say to him: It’s working! The fact that student loans will be costing us an additional £110 per year on average starting in April this year was lost on many of us as we were preoccupied with calculating the increase in our energy bills or determining whether he was throwing an ABBA-themed party in his basement. 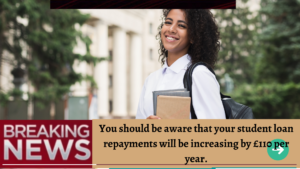 Why did my student loan payment go up in the first place?

Every year, the federal government raises the payment threshold for student loans by 4.6 percent to keep pace with a variety of factors such as the cost of living. This year, they’ve decided not to raise the threshold, but rather to keep it at its current level.

What is the amount of the repayment threshold?

Nobody is required to pay their student loan back until they earn more than a certain amount of money. At the moment, that amounts to £27,295.

This threshold is usually raised by the government once a year, so you will continue to pay the same amount in repayments even as your career progresses and you earn more money in the long run.

University graduates will now have to pay £3,000 more than they expected in interest over the course of their repayments because the government has decided not to raise the debt-to-income threshold this time around.

Is this something that I should be concerned about?

People who are on a Plan 2 student loan, which is essentially anyone who began university in England, Wales, or Northern Ireland after 2012, will be affected by the change.

Graduate students in England and Wales who took out a loan for their Master’s or postdoctoral research after the 1st of August 2016 will be affected as well; the repayment threshold will be frozen at £21,000, meaning they will have to pay an additional £87 per year.

Is this something that has happened before?

Not in this manner, but there have been numerous instances in which students have borne the brunt of the consequences more severely than other sections of society, most notably when Nick Clegg persuaded everyone to vote for the Liberal Democrats on the promise that he would phase out student loans entirely, only to form a coalition government with the Conservatives and triple them instead of phasing them out entirely.

How is it possible for the government to simply change the rules governing our loans?

Technically speaking, our loans are being adjusted all of the time by the government, according to James Yelland, a communications and marketing manager for The Money Charity.

“When it comes to savings accounts, think about fixed and variable interest rates. As a result of their commitment to the loan, banks will, on average, offer a lower fixed rate, according to the expert.

The basic structure of student loans is that they are variable rate loans, which means that you get a better deal overall, but the government can change the rate at any time in accordance with a wide range of factors that they determine.

What is it about this particular change that makes it worse than other changes?

Another way in which the government appears to be attempting to recoup pandemic spending from lower-income people while simultaneously offering tax breaks to the wealthy is through the impending increase in National Insurance.

“It’s a violation of a policy pledge that’s been in place for about ten years,” says Yelland, referring to the threshold adjustment. “This is clearly one of the measures where they determined that they needed to claw back some additional funds for the government,” says the author. It’s extremely frustrating.

What do the students have to say?

Surprisingly, the National Union of Students is not a fan of the proposal. As a government spokesperson explained to VICE, “the concept of a repayment threshold exists only because this government prefers to marketize higher education rather than seeing it as a public good.”

“They should reevaluate their priorities, stop viewing education as a commodity that can be bought and sold for personal gain, and abolish tuition fees.” Once this is accomplished, the student movement’s vision of an adequately funded, accessible, lifelong, and democratized higher education system can be put into action.”

What does the federal government have to say about this situation?

“Because the cost of higher education to the taxpayer continues to rise, the government wants to ensure that the student loan system is underpinned by sustainable funding arrangements so

that it provides value for money to both those who benefit from higher education and the taxpayer,” according to a post on a government blog called The Education Hub, which reads like someone trying to mug you in the most polite way possible.

Because of this, the use of pre-pandemic statistics appears to be particularly suspect, especially given the fact that, in the fiscal year ending in ’21, a third of all workers saw their household income fall, and one in every four was furloughed.

How is it that the government is simply permitted to change our loans?

Technically, they haven’t altered the terms of the loan in any way. However, they haven’t changed the threshold for when you have to pay it back to keep up with increases in earnings, inflation, and a whole host of other factors such as the cost of living. Sneaky snatches.

Who are the beneficiaries of student loans?

Despite the fact that the government has historically sold off chunks of the country’s student loan debts to individuals and corporations looking to profit from the system, the majority of student loan debts are still owned by the government, which means that this threshold freeze will help pay off the national debt, or it could go towards more ABBA parties… who knows?

What should I do if I am unable to repay my student loan debt?

Yelland advises not to be overly concerned. “Of course, if you averaged it out over the course of the year, that means that £10 is taken out of your pay packet.”

“However, it’s one of those slightly nebulous concepts of money that was never really there in the first place,” he explains, adding that it was “almost never there.”

Overall, “you will never actually see or have [the money] in your hands,” as is the case with National Insurance, which is deducted directly from your wages.

In short, you can’t default on your student loan repayments because they’re automatically deducted from your wages, but you may notice a pinch in other areas of your budget as a result of the automatic deduction from your wages. In any case, student loans are forgiven 30 years after the date of your graduation from college. Isn’t it amazing how quickly time passes?