Home News Homeowners Can Now Apply for Grants That Will Cover Half of the...

The government has given its approval for plans to allow homeowners to apply for grants to cover up to half of the costs associated with major home renovations.

On Tuesday, the Cabinet gave its approval to the plans for the home insulation program. 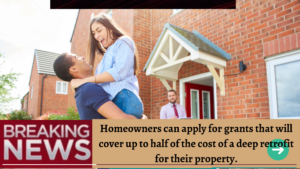 According to the National Home Energy Upgrade Scheme, it is possible to retrofit approximately 500,000 homes to B2 Building Energy Rating (BER) standards by 2030, which is nearly a third of the country’s housing stock.

The scheme also aims to install 400,000 heat pumps by the end of the year.

The project, according to government officials, is one of the state’s largest and most difficult capital infrastructure projects to date.

Households can apply for grants of up to €25,000 from the government to assist them in making improvements to the energy efficiency of their homes.

The program will cover nearly half of the cost – approximately 45 to 51 percent – of completing a deep retrofit of a house in order to bring it up to a B2 energy rating.

The government hopes that the package of incentives will make it easier and more affordable for homeowners to make improvements to their properties.

The measures are also intended to remove roadblocks to the implementation of energy efficiency improvements.

The Sustainable Energy Authority of Ireland (SEAI) is in charge of implementing the program (SEAI).

Another idea is to establish “one-stop shops” where people can get everything they need to upgrade their homes in one place.

Homeowners, according to government officials, will benefit from the simplified process.

Other homeowners may choose to have individual measures taken on their behalf. In these instances, people pay the contractor the full amount due for the work and then submit a claim to SEAI for reimbursement of the grant.

It is anticipated that the grants will be paid out within a couple of weeks of the completion of the construction.

Additionally, there are grants of up to 80% available for those who wish to complete minor home improvements, such as insulating attics.

The retrofit program is a component of the government’s efforts to reduce emissions from the sector by half.

However, supply chain skills may not be sufficient to meet the level of activity required, as some have expressed concern.

Tuesday evening, the SEAI website will make the individual measures available to the public.

Applications are expected to be available for use by the end of this week, if not sooner.