Home News IRS Wants More Employees to Help It Reduce Its Backlog, but No...

The Internal Revenue Service has far too many unprocessed tax returns from the previous year — and far too few job applications for employees who will assist the agency in reducing the backlog of tax returns.

According to Erin Collins, national taxpayer advocate at the Internal Revenue Service, only 179 positions have been filled so far despite the IRS’s desire to fill 5,000 positions at various campuses across the country. 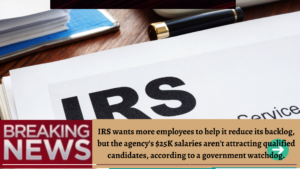 At the same time, the Internal Revenue Service is dealing with a backlog that included 6 million unprocessed 2021 tax returns and another 2.3 million amended returns as of late December.

Clerical jobs that require wading through mountains of paperwork don’t come with particularly attractive pay, according to Collins, who testified before Congress Tuesday. A large number of positions associated with submission processing begin at a federal worker pay grade that is just under $25,000 per year, according to her.

The IRS is having difficulty finding enough suitable job applicants; she wrote in testimony to the House of Representatives Ways and Means Oversight Subcommittee during a time when employers are raising wages to attract and retain employees during a labor shortage.

“It is a challenge we face in the market,” Collins said during the hearing, noting that jobs at IRS facilities require employees to be physically present in order to handle the documents.

Despite the fact that one IRS campus will be located in Austin, Texas, Democratic Rep. Lloyd Doggett claims that the low starting pay for jobs will not be acceptable to his constituents. “That’s not a living wage here in Austin,” he explained further.

Collins believes that increasing pay, bonuses, hazard pay, and other compensation perks are necessary steps. However, she continues to believe that “we will not be able to hire enough people to get us out of this hole.”

Last week, the Internal Revenue Service announced that it was temporarily reassigning 1,200 employees as part of a “surge team” to help with the backlog. Collins described it as a “good first step” on Tuesday afternoon. “However,” she continued, “we will require more than 1,200 people.”

According to agency statistics, the IRS had nearly 82,000 employees in the fiscal year 2021, with more than 10,500 of them being seasonal employees.

It is the result of temporary IRS office closures that took place early in the pandemic, which had to be balanced against the agency’s responsibilities to distribute three rounds of stimulus checks, Child Tax Credit payments, and various tax-law changes.

According to the IRS, the agency’s workload has been increasing while its headcount has been decreasing for several years.

IRS Commissioner Charles Rettig says he is acutely aware of the backlog that has accumulated since the start of the 2021 tax-filing season and is taking “aggressive actions” to reduce it with the resources he has available. This includes the “surge team” as well as the requirements for mandatory overtime.

“We must continue to pursue innovative strategies while supporting the hard work and dedication of our employees in order to fulfill our commitment to return inventories to a healthy level before entering the 2023 filing season,” Rettig wrote in a letter to lawmakers on Monday.