On Monday, truckers from Canada shut down the busiest land crossing between the United States and Canada in protest of their government’s pandemic control measures. The crossing remained closed on Tuesday.

While traffic in both directions was initially halted, U.S.-bound lanes have since been reopened, according to a tweet from Windsor Police. 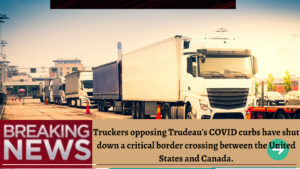 Canadian police also confirmed late on Tuesday that a second border crossing in Coutts, Alberta, had been closed by protesters for both inbound and outbound traffic due to the actions of protesters.

Drivers protesting the federal COVID-19 vaccine mandate for cross-border traffic began blocking the streets of Canada’s capital, Ottawa, on Jan. 28, demonstrating their opposition to the mandate.

Since Sunday night, police have been gradually regaining control of the situation, seizing thousands of liters of fuel and removing an oil tanker truck from the scene.

Many of the heavy vehicles taking part in the blockade, according to Ottawa Deputy Police Chief Steve Bell, have been immobilized by police, who told reporters on Tuesday.

He stated that approximately a quarter of the 418 protest vehicles downtown have children in them, and that police are concerned about their well-being in light of the cold, noise, carbon monoxide risks, and lack of access to sanitation facilities.

Marco Mendicino, Canada’s Minister of Public Safety, told reporters that he had spoken with the mayor of Windsor and other local officials about the blockade at the Ambassador Bridge, which connects Detroit, Michigan, and Windsor, Ontario.

According to him, “we will continue to work…to ensure that supply chains continue to move across the Ambassador Bridge and that the wheels of our economy continue to turn.”

“It is clear that the scope of these disruptions has expanded beyond the implementation of the vaccine requirement,” White House press secretary Jen Psaki said in a statement. According to Psaki, “we are, of course, in contact with our Canadian counterparts” regarding the blockade.

It was stated in a statement issued by the bridge’s owner, the Detroit International Bridge Co, that international commerce on the bridge needed to be resumed as soon as possible in an environment that reflected mutual respect.

PLANS FOR THE REOPENING

In a statement issued by the Canadian Vehicle Manufacturers’ Association, the president stated that “persistent delays at the Ambassador Bridge risk disrupting automotive production, which employs tens of thousands of Canadians.” He also called for an immediate end to the blockade.

In his first public appearance in more than a week following his infection with COVID-19, Canadian Prime Minister Justin Trudeau stated that the protests had to be put to an end.

During a question-and-answer session in parliament on Tuesday, interim Conservative leader Candice Bergen asked Trudeau whether he would follow the science and end the restrictions as soon as possible. Trudeau responded that “we’re going to continue to follow the science.”

Trudeau has denounced the tactics of the demonstrators, but one of his Liberal Party colleagues has defied the government’s hardline stance on vaccine mandates by speaking out against them.

Deputy Prime Minister Joel Lightbound has called on the government to move away from divisive politics and to present a clear roadmap for removing pandemic restrictions.

After announcing plans to relax pandemic restrictions in other Canadian provinces, Alberta became the latest to do so. Albertans will be able to dine in restaurants and sit in entertainment venues without having to show their vaccine passports starting at midnight on Tuesday, as part of a three-step reopening plan, according to Premier Jason Kenney.

Additionally, Quebec Premier Francois Legault announced on Tuesday that the province’s offices, businesses, bars, and social activities will gradually reopen until March 14, and that the province will lift restrictions on the number of visitors permitted in private residences.

Legault insisted that a recent truckers’ protest in Quebec City had no bearing on his plans, but he acknowledged that some residents of the province’s French-language community were dissatisfied with the restrictions.

Saskatchewan Premier Scott Moe has announced that the requirement to show proof of vaccination or a negative COVID-19 test for businesses, workplaces, and other public venues will be phased out on February 14, 2019.