United States President Joe Biden said the Consumer Price Index data for January, which was released on Thursday, served as a reminder that Americans’ finances are under significant strain, and that his administration was employing “every weapon” available to combat the problem.

According to President Joe Biden, “we have been employing every instrument at our disposal, and while today serves as a reminder that Americans’ finances are being stretched in ways that cause genuine hardship at the kitchen table, there are also signs that we will be able to overcome this problem.” 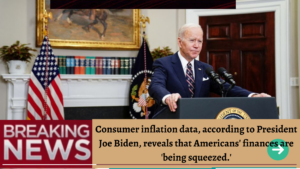 The president also stated that economists predict that inflation would begin to decline by the end of 2022. A decrease in new jobless claims, according to the president, was a result of his administration’s measures, which he regarded as evidence of “genuine success.”

Consumer prices in the United States climbed steadily in January, contributing to the largest annual increase in inflation in 40 years and igniting speculation in financial markets that the Federal Reserve will raise interest rates by 50 basis points next month as a result.