As a result of President Biden’s first year in office, the economy has experienced historic employment creation, unparalleled wage rise for low-income people, and the strongest GDP growth in decades.

However, surveys show that the majority of Americans are dissatisfied with the way the president is handling the economy — which presents a challenge for President Joe Biden and Democratic lawmakers as they prepare for the November midterm elections. 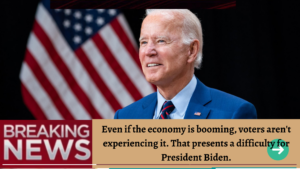 When it comes to traditional economic indicators, the president and his advisers often point to numbers that show the economy is booming, as if they are perplexed as to why the American public isn’t giving Democrats more credit for the expansion.

When the president presented remarks on the January jobs report last week, he highlighted the fact that the economy had added 6.6 million jobs during his first year in the presidency.

According to President Joe Biden, “if you can’t recall another year when so many people went to work in this nation, there’s a reason: it never happened.” Biden instructed reporters to examine economic figures dating back 40 years to President Ronald Reagan’s administration. “Here is where history is being written,” he said.

However, there is one piece of economic data that is reaching levels that have not been seen in 40 years: inflation. And it’s a problem that Vice President Biden and his administration have battled to resolve.

Consumer prices have risen by 7.5 percent from where they were a year ago, according to new statistics released on Thursday. As the cost of food, electricity, and shelter continues to rise, inflation has reached its highest level since 1982.

Despite the fresh numbers, Biden did not speak on inflation during his visit to the Commonwealth of Virginia.

Shortly after the release of the inflation figures, President Joe Biden visited the Virginia district of Democratic Representative Abigail Spanberger to meet with her. She was initially elected in 2018 by a razor-thin margin in a seat that had previously been a Republican bastion, and Republicans are working hard to flip the district in November.

The White House has been urged to spend less time on its proposal for massive spending on the social safety net and more time on inflation and other economic issues by Democrats in vulnerable districts like Spanberger.

Biden admitted for a brief moment that food and gas prices are rising, but he remained focused on his plan, known as Build Back Better, saying that it will cut costs for items such as prescription drugs and daycare.

“You want to lower the cost of living for people — down the costs of living in these locations,” Biden stated in response to a question about his proposal.

The plan has passed the House of Representatives, but it appears to be on its way out of the Senate, where Democratic Senator Joe Manchin has stated that he opposes more government spending because of inflationary pressures.

Inflation is soaring, and this is causing voters to suffer in the process.

Despite the several good economic data points that have been observed this year, economists and analysts assert that people are experiencing inflation on a visceral level, which gives it disproportionate power.

“People experience inflation in a different manner than they experience other economic indicators,” said Jack Lew, who served as Treasury Secretary under President Barack Obama. “Every time you fill up your tank of gas, the price of gasoline is represented.”

For months, Larry Summers, director of the National Economic Council under President Barack Obama, has been sounding the alarm about inflation in the United States.

“For 2 or 3 percent of the population, more unemployment is the difference between having a job and not having a job. More inflation means increased prices for everyone, regardless of income: “”It’s a lation,” Summers explained.

“People have a tendency to believe that… rising costs represent something that is being taken away from them,” Summers explained.

In other words, individuals believe they have been taken advantage of by inflation.

There isn’t much Biden can do to stop inflation from occurring.

Inflation is a difficult concept to grasp. The Federal Reserve, which is in charge of interest rates, has a significant influence on whether or not they rise or fall in the short term.

Darrick Hamilton, an economist at the New School for Social Research in New York, believes that context is essential. “We have just undergone the most severe economic downturn on record. Likewise, the shortest recovery time on record was achieved “Hamilton went on to say.

“A large part of this was due to government assistance, which enabled us to weather the pandemic and thrive when it ended. As a result, there will be inflation in the future.”

Some economists attribute the current level of inflation to the $1.9 trillion COVID-19 aid package known as the American Rescue Plan, which was implemented last year.

However, the alternative could have been far more disastrous, according to some experts. They believe that if the COVID-19 relief money had not been made available, the economy would have entered a recession.

Republican “strategic political gaslighting,” according to Hamilton, has propelled the inflation argument, which has “exploited apprehension around topics like inflation,” he claims. Likewise, he agrees with the Biden administration’s conclusion that the present surge in inflation is only temporary in nature.

Given the increased cost of living, it is difficult for Biden to claim credit for the economy.
Even while wages for low-wage workers have grown, many of them believe that the rises they have received have been canceled out by growing prices.

Former Treasury Secretary Jack Lew stated: “There is an old concept that you cannot tell people how they feel and that they feel better than they actually do.”

He explained that the Biden administration must strike a balance between taking credit for accomplishments such as the COVID-19 relief package and the fact that COVID-19 and inflation are still very much on people’s minds on a daily basis.

Lew recalls the Obama White House grappling with a similar communications dilemma during the recovery from the Great Recession of 2007-2009: how to highlight the president’s accomplishments while conceding that people still required additional assistance from the government.

Voters’ dissatisfaction with COVID-19 is also influencing their perceptions of the economy.
As a result of the coronavirus pandemic, many voters feel irritated and fatigued, and they view the economy through that prism.

Voters, according to analysts and pollsters, are still concerned about the possibility of economic turmoil as a result of a potentially new and unexpected coronavirus variety.

According to economists, there is evidence that people’s perceptions of the economy are frequently based on expectations of change rather than the existing state of affairs. Because of the ongoing pandemic, individuals have become more pessimistic about their economic prospects after experiencing a brief summer of optimism earlier this year.

When asked about the economy, Austan Goolsbee, the chair of the Council of Economic Advisers in the Obama administration, said: “You know people are going to be concerned about it until the pandemic is over.”

“It makes no difference if you read in the newspaper that the unemployment rate has dropped significantly and that we have added more jobs in a year than we have ever added in a year. It doesn’t matter as long as we are in a worse position than we would have liked to be in “he explained.

Going back to the economy, Goolsbee believes that public opinion on the epidemic is closely related to the president’s approval rating in that area. Finally, he is not confident that even a reduced inflation rate will have the ability to profoundly impact how people feel about the economy until COVID-19 is no longer continually hanging over their heads.

According to a pollster, Biden has improved the way he talks about inflation, but he has to say it more frequently.

According to Democratic pollster Celinda Lake, voters in polls and focus groups have shown concern about the economy for some months now.

“The instability is causing a great deal of concern among the general populace,” she remarked. Voters are worried about economic volatility and the rising cost of living.

“It strikes them every day, it hits them every purchase and it really makes them feel depressed about the economy,” Lake added. “They’re concerned that wages are not keeping up with the rising cost since you get a salary twice a month And you buy something that’s more expensive every day.”

Initially, the president and his team used the phrase “transitory” to argue that price hikes were not a permanent issue.

But over time, Biden turned and began expressing more of the suffering that people were feeling at the petrol pump and the grocery store.

The president’s approval ratings will play a significant role in the next midterm elections.

Alan Abramowitz, an Emory University political science professor who has studied the results of every midterm election dating back to World War II, believes that a president’s approval rating is a far better predictor of what will happen in the midterms than any economic indicator.

“It doesn’t matter how good or awful the economy is doing; if people perceive it to be bad, that will almost certainly affect the president and his party in the midterm elections,” he said.

Since inflation appears to be weighing down the president’s approval ratings, observers say Biden needs to make it apparent that he is concerned about the situation — regardless of whether or not he has the ability to actually solve the problem.

According to Bill Galston, a former domestic policy adviser in the Clinton White House who is now a senior fellow at the Brookings Institution, when there is a problem, “people don’t necessarily want you to solve it tomorrow, but they have to see you trying,” remarked Clinton.

“As a result, if I were Biden’s scheduler, I would arrange for him to be absent from the office a couple of days a week to demonstrate his dedication to fighting inflation.”