Home News Apple Is All Set to Give Wages Raise to Almost Every Retail...

Apple will pay raises to staff as the job market continues to tighten in the hopes of retaining those who work at its retail outlet locations.

Following a series of shop briefings and one-on-one talks with staff this week, the Cupertino tech giant announced plans to raise the salary of its retail personnel. 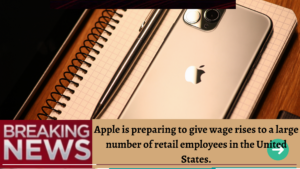 Starting this month, salespeople, Genius Bar technical support, and some top hourly employees will get an increase in their wages, according to the company. The rises will range from 2 percent to 10 percent, depending on the location of the store and the role played.

According to Bloomberg, the raises are intended to compensate employees who worked in Apple retail locations prior to the outbreak of the COVID-19 virus epidemic in 2015. The idea is to better align seasoned employees with newly hired employees.

It is not all employees who will be affected by the increases, and not all stores have been advised of the changes as well.

According to the company, Apple also intends to considerably raise benefits for Apple Store employees beginning in April. In order to retain staff, the corporation intends to increase the number of sick days and vacation days available.

The New York Times reported in December that hourly workers in Apple’s retail outlets and customer service call centers have detailed how poor working conditions have resulted in financial difficulties and even suicide attempts by employees.