The Department of Justice (DOJ) stated that a former Amazon employee had been sentenced to 10 months in prison and fined $50,000 for participating in an international fraud and bribery conspiracy.

Following his guilty plea to conspiracy in September 2020, Rohit Kadimisetty, a resident of Northridge, California, was sentenced on Friday. According to the Department of Justice, he was one of six people accused of fraud and the first to be jailed as part of an international conspiracy to manipulate the Amazon marketplace. 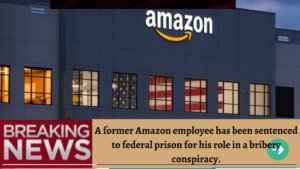 The gang is accused of bribing Amazon employees in order to acquire an unfair edge in the company’s marketplace.

According to the Department of Justice, Kadimisetty relocated from India to the United States in 2015 and hired Amazon employees in India in order to “misuse their employee privileges and access to internal information, systems, and tools,” according to the DOJ, which also noted that several contacts in India have been fired from the company since then.

According to CNBC, on Friday Up until the end of 2015, Kadimisetty worked as a seller support employee in Hyderabad, India.

According to the United States Attorney for the Western District of Washington state, Nick Brown, “Mr. Kadimisetty utilized his knowledge and contacts from his work at Amazon to profit himself by manipulating listings on Amazon Marketplace.”

According to the Department of Justice, the defendants have been acting as “consultants” to third-party sellers on Amazon Marketplace since 2017, who have marketed anything from electronics to dietary supplements.

Kadimisetty is accused of bribing Amazon employees for a total of $100,000 in order to obtain confidential business information about the company’s algorithm and to facilitate “attacks” on other sellers by using fictitious email accounts, encrypted messaging services, and third-party bribes in order to conceal the nature of his scheme.

According to Amazon, “we work hard to establish a trustworthy purchasing experience by protecting customers, selling partners, as well as Amazon, from fraud and abuse, and we have mechanisms in place to detect suspicious conduct,” the company stated in a press release.

There is no place for fraud at Amazon, and we will continue to pursue all efforts to secure our shop and hold the perpetrators of fraudulent activity accountable.”
Kadimisetty stepped away from the project in 2018.

The trial for the remaining four defendants is slated to begin in October.