Home News Blinken: the United States Intends to Increase Its Presence in the Pacific...

After arriving in Fiji on Saturday for a state visit, Secretary of State Antony Blinken expressed confidence that the United States will have a “long-term future” in the area.

At a news conference with Acting Fijian Prime Minister Aiyaz Sayed-Khaiyum, he made a number of commitments, including pledges to aid the area with climate change and access to COVID-19 vaccines. 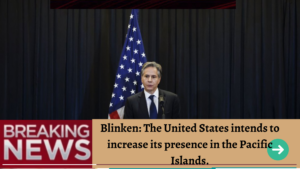 The United States will soon open an embassy in the capital city of the Solomon Islands, which is another country in the region located around 200 miles east of Papua New Guinea, according to Blinken’s statement.

“There is no other region on the planet that will have a greater impact on the lives and livelihoods of Americans than the Indo-Pacific, which accounts for 60 percent of the global economy and two-thirds of all economic growth over the last five years,” Blinken stated.

“Every defining issue of the twenty-first century runs through this region: the climate catastrophe, global health, the future of technology, and whether or not nations will be free to chart their own course or will be subject to pressure by more powerful countries.” “

Blinken’s visit to Fiji marked the first time a secretary of state from the United States had visited the country since 1985.

His statements pointed to a rising sense of anxiety among U.S. policymakers who are paying attention to the Pacific’s island states, which is that China is strengthening its political and economic influence in the region, according to his remarks.

Iati Iati, a senior lecturer and Pacific security fellow at the Victoria University of Wellington in New Zealand, told the New York Times on Saturday that while there are significant differences between Pacific island countries, “there is a clear understanding, even if they don’t admit it, that they are caught up in an intensifying geopolitical rivalry.”

For more than a century, the United States has maintained a tenuous presence in the Pacific Islands — a vast territory that includes Hawaii, New Zealand, and parts of eastern Asia. While military stations were established on the islands during World War II, interaction with the island states has become more limited since then.

During former President Donald Trump’s administration, officials expressed concern that China would expand its influence in the Pacific and effectively shut the United States out of the region, making it difficult for the United States to open or maintain military bases in the event of a war in the Asia Pacific.

According to Insider, Mike Pompeo became the first secretary of state from the United States to visit the Federated States of Micronesia in 2019.

According to a report published Friday by the Washington Post, officials in the administration of Vice President Joe Biden have expressed similar concerns. Blinken’s journey, which includes visits to Japan and South Korea, is part of a new effort to deepen relations in the region, which involves a number of other countries.