If you haven’t made any plans for your tax refund yet, you might want to consider converting it to cryptocurrency. Coinbase has partnered with TurboTax to provide its users with exactly that choice.

Cryptocurrency account holders who use TurboTax to file their taxes have the option of depositing their refund into Coinbase, where it can be automatically converted to Bitcoin, Ethereum,

or more than 100 other cryptocurrencies or stablecoins, or they can choose to keep their refund money in dollars and trade with it whenever they want, according to a recent blog post from the cryptocurrency exchange. 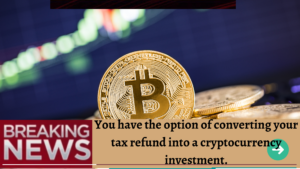 Coinbase does not charge a transaction cost, and the company is also offering a discount of up to $20 off the TurboTax price. 1

The introduction of a new tax refund option demonstrates how well-accepted cryptocurrencies have grown. According to a Morning Consult study conducted in mid-2021, one in every five respondents in the United States claimed to hold some sort of cryptocurrency.

As recently as this year, even the newly elected mayor of New York City, Eric Adams, received his first paycheck in Ethereum and Bitcoin.

Last year, the average taxpayer received a refund of slightly more than $2,800. According to a National Retail Federation survey, 54 percent of individuals who expected to receive refunds last year planned to keep the money, while 27 percent planned to utilize the money for everyday costs. 3

A blog post by Bipul Sinha, senior product manager at Coinbase, stated that “our users are increasingly thinking about how to incorporate cryptocurrency into their savings and everyday purchases.”