Home Celebrity Rand Paul Suggests the Protesting Truckers “Clog Up Cities” in the US...

Rand Paul, a Kentucky Republican Senator stated that the truckers must “clog things up”. He persuaded the truckers to host a Freedom Convoy in Canada and also asked the anti-vaccine protestors to do the same in the U.S. During an interview, he said, “I’m all for it,” “Civil disobedience is a time-honored tradition in our country, from slavery to civil rights, you name it. Peaceful protest, clog things up, make people think about the mandates.”

The Department of Homeland Security confirmed about another convoy that could create havoc on Super Bowl Sunday in Los Angeles, Paul passed this remark that came quietly as a surprise. However, such an incident is unlikely to happen as expert social media tracking firm claims.

What Did Rand Paul Have to Say?

The bulletin was reporting the important news and it hinted about a convoy that is planning to create chaos in President Joe Biden’s Washington DC. This was planned for March.

The Kentucky senator further added, “It’d be great, but the thing is, it wouldn’t shut the city down because the government workers haven’t come to work in two years anyway,” “I don’t know if it’ll affect D.C. It’d be a nice change. We’d actually have some traffic.” He made the final remark, “I hope they clog up cities.”

What Do the First Critics Think About the New Film of Tom Holland?

Why Did the Truckers Block?

It is seen that the police have been having an ongoing tiff with the truckers and it rapidly spread. Starting from the Ottowa capital to covering the busy streets of many Canadian cities and even key border crossings, it has delayed many operations in the meantime.

Drivers were blasting horns and also created a blockage that didn’t let the traffic pass. Canadian prime minister Justin Trudeau passed a mandate where truckers couldn’t pass the U.S. border if not fully vaccinated. In case they aren’t vaccinated, they need to show documents verifying their quarantine requirements.

This has surely angered a lot of truckers as protests were there and many asked the liberal prime minister to give up his position.

However, the protests have been limited to Ottawa only as this has triggered many similar protests in New Zealand, Europe, and even Australia. So, the protest has gained wide acceptance and popularity but it is something that shouldn’t have happened.

Is There Truly Any Possible Threat?

Pyrra is a Washington-based firm that helps in locating and evaluating the threats existing in the real world that might be the reason for the social media activity. As per their findings, there weren’t any strong signs that showed how this can affect the Super Bowl Sunday. It wasn’t proven that the Super Bowl has been a target that was initially spread as a rumor.

A channel in Telegram had participants who shared news about the protests from all over the world. There was a subtle mention of the Super Bowl protest. Almost 8,000 voters confirmed to not participate in this. So, clearly, there wasn’t any plan.

The ongoing protest is still active and Trudeau along with his elected officials have requested many times to call off the protest.

The main hotspots of this protest are Detroit, Michigan, and Ontario. To control the protests, Canadian police started making arrests. Even tow trucks were arranged to pick up trucks that were blocking the paths.

African-Americans Are Largely Falling Behind in Great Wealth Transfer.

However, among all the chaos, Rand Paul’s statement came out as the worst of all. It clearly showed that the senator had the intention that would have disrupted the peace of the nation. The vaccine has become mandatory and supporting anti-vaccine protests in the midst of a pandemic will not work in favor of the citizens.

Instead of tackling the situation, Rand Paul is doing the exact opposite. What do you have to say, did Paul do right or wrong? 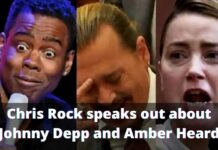 Chris Rock speaks Out About Johnny Depp And Amber Heard