The videos, shot between March 23 and 30, show dead Ukrainian civilians of Bucha near Russian military equipment in the Russian- Ukraine War. The independent Russian media source Meduza captured high-quality drone footage of the city’s southern area and uploaded it online.

The films were filmed between March 23 and 30 by Russian Sergei “Botsman” Korotkikh, who is fighting with Ukraine. The bodies in the footage matched those found on April 1 and 2 after Russian soldiers left the city.

The videos show Russian military equipment near the dead. 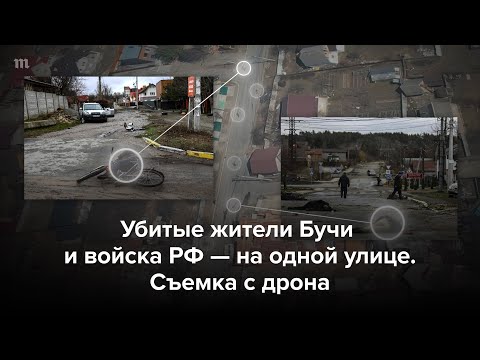 Meduza is a Russian and English-language news site located in Latvia. The Russian communications regulator Roskomnadzor had previously labeled it a “foreign agency,” a decision the EU rejected. The recordings imply that not only did the Bucha Massacre occur, but it occurred before Russian soldiers departed the city.

It also refutes Moscow’s denial that Russian troops were responsible for the city’s enormous casualties, instead of blaming Korotkikh and his group. Russia claims this group killed civilians after Russian troops left town, however, Meduza’s dating seems to refute this claim. Indeed, independent specialists interviewed by Meduza claimed that the first footage of the dead was recorded no later than March 26.

After retaking the city, Ukraine found the Bucha Massacre. 280 remains have been collected and buried in mass graves since the Ukrainian forces retook Bucha, according to Mayor Anatoly Fedoruk. The victims uncovered in Bucha totaled 320, with only half (163) positively identified, Fedoruk told Voice of America.

“These are the citizens of our city who were cynically killed, brutally tortured by the Russians,” he said. “We know their last names, first names, patronymics, where they lived, who they were – either a father, or a son, or a wife, in one family or another.”

Many accused Russia of committing war crimes in Ukraine after the purported killing. However, it is believed to be one of many Russian atrocities. After visiting Bucha on Thursday, the UN’s top humanitarian official urged an investigation into the alleged massacre.

While visiting the Ukrainian cities of Bucha and Irpin with Deputy Prime Minister Olha Stefanishyna, UN Under-Secretary-General for Humanitarian Affairs Martin Griffiths was received with horror.

“He saw a mass grave with bodies wrapped in plastic, dozens of apartment blocks and houses destroyed, and burned-out cars in the street, “UN spokesman Stéphane Dujarric said.

To ensure responsibility, he called for an “immediate, independent investigation to guarantee effective accountability.” On Thursday, Ukrainian President Volodymyr Zelensky stated the situation in Borodyanka was “much worse” than in Bucha.