The increase in the number of spamming and phishing activities has put the users in danger time and again. Google has actively participated in minimizing spamming or fraudulent practices and so, new measures will be introduced in just a month. Google will ban 3rd party call recording apps from Play Store starting on 11th May and it can be a huge step to reduce or permanently shut down the accessibility of alternative APIs.

This Will Be A Permanent Ban

Well, Google has been blocking real call recording for many Android 6 phones and also over microphone recording on devices with Android 10. Many developers were seen to use accessibility APIs which further aided in recording calls through the Android devices.

You may be wondering what Accessibility Service APIs mean. To be clear, these tools provide additional services that help the developers to access certain features which you may not be able to receive due to the existing challenges in the system. In this way, the services will help the third-party app developers to fulfill their motive of recording calls bypassing the basic security system.

However, with this new introduction of the policy, these third parties will not get any chance to breach any policy. The alternative measure of Accessibility service that the third-party apps used to prefer will no longer be active through the Google Play Store version.

In its announcement that declared the policy change, Google said, “The Accessibility API is not designed and cannot be requested for remote call audio recording.”

The Change Was Initiated For A Long Time

It was since 2017 that The Chocolate Factory focused on removing apps that use Accessibility Services but comes to no help from users who are physically disabled or challenged. In fact, multiple letters were sent to the app developers starting from November 2017 to put emphasis the fact that accessibility services must aid physically disabled people and not put them into a problem.

Now, this policy was initially introduced to the users on 6th April but many considered it to be just another announcement from Google. Well, once Google has live-streamed this updated and latest developer policy, it highlighted the point that this call-recording policy has been existing and they are just providing clarification for avoiding further confusion.

382. Google to ban all 3rd-party call-recording apps from Play Store:

Though many pointed out that the video is from April 2020 but it was just a mistake. The live stream happened in April 2022 and as per a Redditt thread from the NLL developer, Google has been conducting many such errors for a long time now.

The NLL who is behind the making of Another Call Recorder (ACR), mentioned, “If you watch the video, however, you will see that the speaker mistakenly claims phone apps have access to call audio. This is not correct, only phone [apps] that come with your phone or are made by Google can access the call audio. Third-party apps cannot.”

Besides, many are also against this ban. They pointed out that if Google restricts the users from calling recording via the apps available in Google Play Store, the users will try to find and use other suspicious and unsafe apps that can be very risky.

On the other hand, this policy does not apply to many default dialer apps that are already preinstalled on certain devices. Some of the most prominent ones in this field are Google Phone, Samsung, and Xiaomi’s Mi Dialer. So, it might be quite an injustice as all the apps will not get affected. 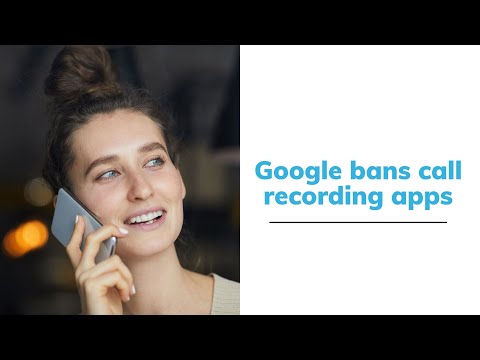 “Many default dialer apps like the Google Phone, Mi Dialer, and more have native call recording functionality built-in on specific devices. Those default dialer apps on devices such as Pixel and Xiaomi smartphones will not be affected by the change.”

Only a few days left until the policy will come into effect. It is going to start on the 11th of May and it is also on the same day the Google I/O annual developer conference will be hosted.

Google will ban 3rd party call recording apps from Play Store starting on 11th May and it can be a huge step to reduce or permanently shut down the accessibility of alternative APIs. We capture this latest information earlier as compared to the other sites.

Guys stay tuned with us to get the latest update about every news like this. We will be happy to provide you with the best and latest news. Keep sharing and leave your comment in the comment section. and visit Lee Daily.