Are Tom Holland And Zendaya Still Together? Tom Holland, and Zendaya, were photographed kissing last year, confirming their romance after years of claiming they were just best friends. Of course, Tom and Zendaya portray the legendary Peter Parker and MJ in Spider-Man, and a fourth movie rumored to be in the works might bring the couple back to the director’s chair!

Marvel fans have been waiting for them to start dating, and now that they have made numerous red carpet appearances and public PDAs, they can finally call themselves boyfriend and girlfriend. In footage of the couple from their movie commercial, which continues to go viral due to how adorable a couple they are, fans can see how in love the actors are.

From being true best friends to being boyfriend and girlfriend and all the cute moments in between, we’re looking back at their real friendship and relationship history. When did they begin dating, and how long have they been together?

Zendaya warmed our hearts more than we imagined after posting the cutest birthday message to her boyfriend. Happy birthday to the one who makes me the most comfortable, Tom! The actress said on her Instagram after posting a black-and-white photo of the couple looking cuddly to mark Tom’s birthday. Words cannot express how wonderful they are!

Tom can be heard saying to his fiancée, “You look so gorgeous, dear,” in old footage from a press event, perhaps for their newest Spider-Man movie, before they realized the cameras were filming.

Zendaya’s stunning Instagram shot of her wearing a vintage Balmain gown left everyone in awe, and Tom’s response in the comments was the icing on the cake.

“First,” said the Marvel man to energize his partner. Holland made a funny remark early on, letting everyone know he isn’t just her boyfriend but also a fan! The Spider-Man actor’s comment received tons of likes, garnering over 140k on the first day after posting it. The co-stars’ sweet romance drew comments from fans, who wrote: “Tom being Zendaya’s number one fan is my favorite thing ever.”

Tom and Zendaya offered fans another taste of how in sync they are with their fashion choices just one day after the A-list pair were caught color-coordinating their formal dinner attire.

The Spider-Man co-stars wore identical jerseys during a New York Rangers ice hockey game, proving they are the most fashionable and in-love couple. They wore jerseys with each other’s names, which is even cuter.

Fans of the A-list pair have compiled Tom Holland and Zendaya’s cutest moments into a video montage that has gone viral, proving they are the definition of relationship goals. Fans can’t get enough of how much the pair is constantly in sync as the compilation highlights every instance they have been!

As she left the CFDA Fashion Awards with a much-desired award, Tom couldn’t help but gush over his beau. At the lavish event on November 10, the 25-year-old received the Fashion Icon Award, and Holand was all gushing praise for his girlfriend.

Along with a stunning photo of the actress, he posted it on Instagram to express his pride, writing, “Naaa stop it. A remarkable accomplishment for a unique individual. Congratulations to Zendaya and Luxury Law, who deserved every bit of this. This Marvel character is a great mate, for sure!

Zendaya And Timothée Chalamet Discuss Her Relationship With Tom Holland

Zendaya and Timothée Chalamet made the cutest reference to the actress’ romance with Tom Holland while speaking with Buzzfeed about their next film, Dune. 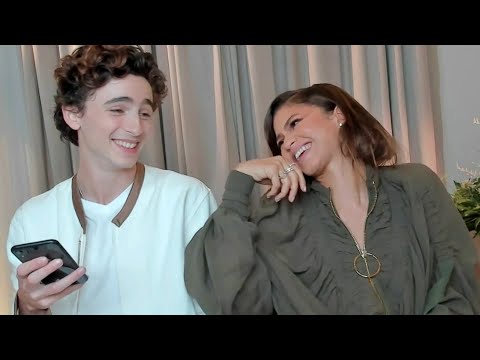 The co-stars were asked to guess each other’s most prominent celebrity crush. Timothée immediately replied, “Easy, Tom Holland,” to which Zendaya giggled wildly, which we will take to mean they both agreed!

Tom sent a homage to girlfriend Zendya’s stunning ensemble at the Dune premiere and included a heart-eyes emoji to the message, proving he’s #BoyfriendGoals.

Zendaya replied with the glossy-eyes emoji, demonstrating that even she couldn’t stand how adorable he was.

Zendaya And Tom Holland Have Romantic Holiday Together

Nothing says serious romance like a trip away with your significant other, and Zendaya and Tom were seen on their way home after a quick escape in Santa Barbara. They may have spent the Fourth of July weekend together because that is when they were seen cuddling up in a car.

When Did Zendaya And Tom Holland Start Dating?

Tom and Zendaya appeared to confirm their relationship status on July 1, 2021, by sharing a kiss while sitting in their parked automobile. Despite taking things to a romantic level, they were also seen having fun and laughing, demonstrating that their friendship was still as strong as ever.

It wouldn’t be the first time actors from the Spiderman series had an off-screen romance with the original Peter Parker. After the first meeting in the 2002 movie, Toby Maguire and Kirsten Dunst had a brief affair, and Andrew Garfield and Emma Stone of The Amazing Spiderman dated for four years before getting engaged in 2015.

Although these two have repeatedly denied their relationship, Zendaya made it abundantly clear that they were dating back in August 2017 when she spoke with Variety magazine.

Wait wait…my favorite is when it says we go on vacations together HA! I haven't been on a vacation in years!😂😭🤣hbu @TomHolland1996 ??? https://t.co/zSkvcfzzTa

“We are close. He’s a cool guy. He truly is one of my closest pals. How many months have we had to go on press trips together? Very few individuals will be able to relate to that at 20.

However, the rumors of their relationship have only strengthened their friendship. Zendaya tweeted an article about their alleged romance and quipped, “Wait, wait…my favorite is when it says we go on vacations together HA! I haven’t taken a break in a long time! @TomHolland1996, how are you?