The terrible murders committed by legendary American serial killer Jeffrey Dahmer are described in the smash hit Netflix limited series Monster: The Jeffrey Dahmer Story. But portraying their life experiences from their viewpoints also sheds light on his long-forgotten victims.

Now, Tony Hughes, a Black man who was deaf and unable to communicate, has had the opportunity to “tell” his story as one of Dahmer’s victims. The show’s sixth episode centers on Hughes and investigates the Victim’s interactions with Jeffrey Dahmer before his death.

The heartbreaking sequences depict Hughes’ life narrative, beginning with his birth and continuing his search for love and his brief but complicated relationship with Dahmer. The episode gives viewers the impression that this story’s conclusion might change. Dahmer admits to his father that, for once, he is content and now has a “new buddy” in his life.

However, Hughes’ tale concludes in the same manner as the others, with a horrifying murder committed by Dahmer.

on October 7, Netflix will release a documentary series titled The Jeffrey Dahmer Tapes if you want to delve further into the serial killer’s motivations. According to The NY Post, the documentary promises exclusive conversations with Dahmer’s legal counsel.

Below is what you need to know about Tony Hughes and his passing.

Tony Was Deaf And Could Not Speak

According to FBI records, Anthony “Tony” Hughes was born on August 26, 1959. According to The Sun, the adverse effects of several medications given to him as a child caused him to lose his hearing permanently as a baby. He appeared to be mute as well.

The Wisconsin School for the Deaf is where Hughes received his diploma, according to Gallaudet University.

He Was A Model

According to The Sun, Hughes relocated to Madison, Wisconsin, to attend college while pursuing a modeling career.

How Did Tony Meet Jeffrey Dahmer?

According to reports, Hughes was interacting with patrons at the LGBT pub where the two first met by writing on a notepad. He used the same method of communication to talk to his final killer, Jeffrey Dahmer.

On May 24, 1991, Hughes danced at a Milwaukee homos*xual bar while on a family visit to Madison. According to recent news sources from The Associated Press, Jeffrey Dahmer “picked him up, took him home, drugged him, dismembered his body, and retained his skull.”

It’s unclear how much of the episode is based on reality and how much has been fiction as it explains how the two became attracted to one another and even has Dahmer visiting some of Hughes’ picture shoots.

Hughes’ mother informed The Associated Press that her son had “started a new job two weeks earlier but never got his first paycheck” and that she could not get in touch with the buddy because she only knew the guy’s first name, Jeffrey. This suggests that Hughes may have been working for Dahmer.

This information was pulled from a poll. On their website, you might be able to discover the same material in a different format or more details.

Who Played Tony Hughes In The Netflix Documentary?

Rodney Burford portrays Tony in the series, which premiered on September 21, 2022.

The Tony Hughes (1960-1991) episode is the most heartbreaking of all the episode. Being gay, black and deaf in the 90’s. Then his friend’s murder. Then he’s murdered. He was so handsome. He could of made it as a model. Rip king #DahmerNetflix pic.twitter.com/2wEmk6lYKt

Where Is Tony Hughes Now?

In 1991, Tony Hughes was slain by Jeffrey Dahmer. However, even in the series, there is information about Tony’s murder.

According to FBI records, Hughes, 31, vanished on May 31, 1991, but his pals last saw him at Club 219 on May 24. His remains, including his skull and vertebrae, were found in Dahmer’s apartment along with the remains of numerous other victims two months later, in July 1991.

Before Hughes was recognized as one of Dahmer’s victims, his sister Barbara Hughes-Holt spoke about her emotions. After human remains were discovered in Dahmer’s apartment in 1991, she told The Associated Press, “Just fearing that one of those bodies could be my brother is terrible.”

The first way to locate Tony was in his dental records, and his mother learned of his passing in the first few days of July.

He Spent Time With Another Victim At Club 219

Hughes frequented Club 219 and was a fan of the entertainer Eric Wynn, also known by his drag persona, Erica Stevens. According to Wynn, Hughes was “my absolute favorite fan.” “When I tried to learn sign language with my huge, old false nails, he would sit there and laugh at me.”

Hughes would “come there early, have a couple of sodas, and write me notes to keep the discussion going,” according to Scott Gunkel, a bartender at the tavern. I didn’t give his disappearance much thought at the time. He told The New York Times.

Eddie Smith, another victim of Dahmer, would frequently go to Wynn’s performances. Only 11 months had passed after Smith’s death before Hughes.

Where Is Tony’s Family Now?

Hughes’ mother, Shirley Hughes, told The Associated Press in 1992 that she “would lose her mind” when her son’s bones were found. She said, “I just prayed and asked the Lord to show me where my son was,” in another interview. I merely wanted to know whether he was alive or not. It hurts the way he passed away. It is beyond description.

According to The Associated Press, Shirley Hughes described her son as “outgoing, jovial, pleasant” and said that “he could easily make friends.”

According to The Tab, Shirley fought hard to pick up her family and rediscover religion following the horrific events, according to a grief counselor who dealt with victims’ families at the time.

Shirley and the rest of the Hughes family have avoided the media spotlight, the publication claimed, save from a few public comments regarding her son. 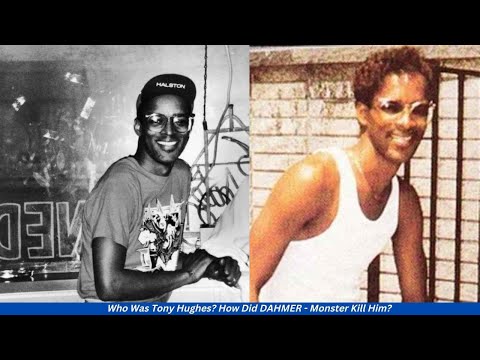 According to History, Dahmer later admitted to killing Hughes and was given 15 consecutive life terms in 1992 for Tony’s murder as well as the deaths of 14 other people. Between 1978 and 1991, Jeffrey killed 17 men and teenagers. Numerous victims of Dahmer were people of races.

A second prisoner murdered Dahmer two years after his sentencing.

Netflix’s ‘Monster: The Jeffrey Dahmer Story’ has viewers interested in the serial killer’s 17 victims. Anthony ‘Tony’ Hughes, 31, is introduced in the sixth episode of ‘Silenced’ after being Jeffrey Dahmer’s 12th Victim. Evan Peters as Dahmer and Rodney Burford as Hughes recreate their 1991 interaction before the murder.

Please stay connected with us on Leedaily.com for more latest updates and details.