Born in September 2020, Zoom served for eight months with the 28 Army Dog Unit. He was a Melanosis or Belgian Shepherd.

Zoom, a feisty assault canine in the Army succumbed to its wounds on Thursday. After being shot twice by terrorists on Monday, Zoom was taken to the Armed Forces Veterinary Hospital in Srinagar for treatment.

The gunshot wounds to its face and back right leg required surgical intervention. As one Srinagar police officer put it: “While receiving treatment at 54 AFVH, our Army dog Zoom passed away around noon.

It appeared to be improving and responding well up until 11:45 when it began gasping and quickly collapsed.” Zoom’s mission was to flush out the terrorists hiding in that house. The canine followed the militants inside the house and began attacking them.

The dog was shot twice and critically wounded during the operation. Still, the dog persisted in his mission and eventually helped eliminate two terrorists. The Indian Army expressed sadness over the loss of its dog.

Tweeted by the Northern Command was the following message: “The Army’s Northern Command Chief expresses his sorrow over the loss of Assault Dog “Zoom.” He passed away on October 13, 2022, from wounds sustained in a line-of-duty incident at Tangpawa #Ananatnag. A true patriot who puts his country first.”

#UPDATE | Army dog Zoom, under treatment at 54 AFVH (Advance Field Veterinary Hospital ), passed away around 12 noon today. He was responding well till around 11:45 am when he suddenly started gasping & collapsed: Army officials

He had received 2 gunshot injuries in an op in J&K pic.twitter.com/AaEdKYEhSh

Zoom, a Melanosis or Belgian Shepherd joined the Army’s 28 Army Dog Unit (ADU) in September 2020 and served for eight months. Out of the Army’s total of 32 units, there are 19 dog units assigned to Northern Command. There are 24 dogs in each canine unit each with a unique specialty.

On Sunday, a joint team from the Jammu and Kashmir Police, the Central Reserve Police Force and the Army conducted an operation in Tangpawa, Anantnag based on intelligence. As a result of the surveillance, the forces were able to make it to the target house but the exact number of terrorists inside was still unknown.

Forces confirmed the presence of two terrorists in the house after readjusting the cordon and exchanging fire off and on throughout the night.

On Monday, the Army said, “During the period, it was spotted by own technical assets that one of the terrorists was injured. After the terrorists had hidden their weapons inside the target house, “the courageous Zoom was sent in to retrieve them,” according to an Army insider.

Zoom crept up on the terrorist and immediately attacked. Terrorists hiding nearby opened fire on it seriously wounding him. The terrorists, however, were destabilized by his efforts and the troops‘ accurate fire quickly eliminated them. 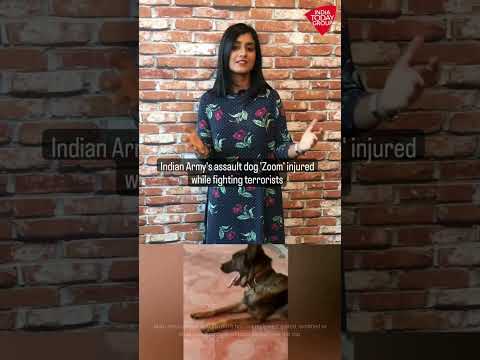 Terrorists armed with rifles are easy prey for assault dogs which are trained to track down and kill them even if they are hiding in a room. Recently conducted operations in Kashmir have confirmed the usefulness of canine soldiers including assault dogs.