While the final episode of Don Mancini’s “Chucky” may have teased the appearance of franchise players, “Hail Mary” plunges right back into the perilous scenario at the Catholic reformatory school.

Even though it means we’ll have to wait another week before seeing Glen and Glenda again, episode three makes the wait bearable with interesting character development that even features Chucky.

Father Bryce knows Jake Wheeler has the Good Guy doll and gives him a limited amount of time to bring it to his office before punishment is meted out. Together, Jake, Devon (Bjorgvin Arnarson), Lexy, and Lexy’s roommate Nadine work to get information from their imprisoned doll.

🖕 to anyone who didn't watch this week's #chucky yet https://t.co/uatEcjZjYb

Jake and Devon, meantime, are caught in Father Bryce’s sights since they have to deal with hiding their relationship and their differences regarding Chucky. Lexy is left to handle a horrible bully issue on her own as well as a drug problem that is becoming more and more dangerous. More Related articles

With ease, “Hail Mary” manages to complicate the lives of its characters beyond their continuous Chucky situation. The most moving narrative in this episode is about Lexy, whose careful sense of control is fast slipping away. Jake and Devon’s rocky relationship and their attempts to disguise it prevent them from realizing that their friend is losing it.

There’s Nadine, a quirky charmer with emotional intelligence hidden beneath her idiosyncrasies. Nadine is still mysterious, but she is still valuable. Nadine is quickly likable to viewers thanks to Higginbotham.

This episode’s favorite killer doll helps to lighten the mood. Chucky serves as the incredibly hilarious comedy relief in “Hail Mary.” An insane parody of A Clockwork Orange is produced by the methods the kids employ to coerce Chucky’s cooperation.

Once more, the series is driven by a love of the horror subgenre, which results in humorous situations and sardonic humor. Both Chucky and the movie “Chucky” continually come up with inventive ways to examine different elements of their respective leads.

The young characters in “Hail Mary” are further drawn into conflicts resulting from their unfamiliar surroundings, adding fresh layers to their troubles. It’s tough for Jake, Lexy, and Devon to avoid Chucky’s impending menace since they must continually conceal who they are from adults’ judgemental gaze. 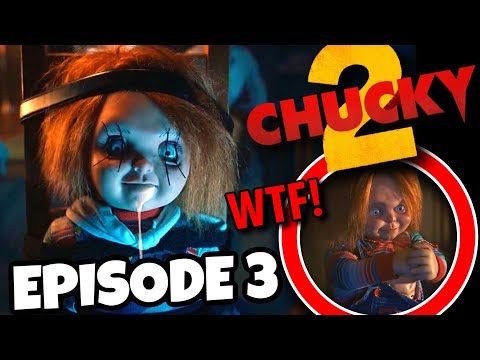 Chucky, on the other hand, offers the shocking ways in which we love to see slasher mayhem. The way everything is handled makes it difficult for us to wonder what Tiffany (Jennifer Tilly) and Nica (Fiona Dourif) are up to these days.

After only three episodes, Chucky’s wild yet inventive travels already hold the promise of an intriguing future. Jake and I both remain in the dark regarding Chucky’s great plans, but the peeks we have here suggest that there are countless options. Since the events of season one, Chucky has been extremely busy. If You want to read more articles then click the links given below.

Who knows what his plans are, but the doll’s appearances in “Hail Mary” guarantee that whatever they are, finding out about them will be a complete joy. This season, it’s obvious that the entire cast and crew are having a blast, and it’s contagious.

On Wednesdays at 9/8c on SYFY and USA Network, catch brand-new episodes of “Chucky.”

Chucky Season 2 Episode 3 should be titled “Hail, Mary” because it needs to return to Season 1’s grandeur. The teens are still adjusting to their new homes when a second doll unleashes chaos.

Stay connected with us for more latest updates and information on Leedaily.com.