Some jokes about Elon Musk (and Fortnite) never go away, some stick around for too long, and some are just empty chatter. In case you’re not aware, Bloomberg estimates that Elon Musk is the richest person in the world. He has invested in Tesla, SpaceX, Neuralink, and the Boring Company, among others companies.

Musk’s vehicle firm might prompt comparisons to Nikola Tesla, but considering Musk’s pattern of purchasing smaller startups like Tesla and then naming himself as CEO, Thomas Edison would be a more appropriate analogy for Musk as a businessman and venture capitalist.

It’s also important to note that the business ethics of two of Musk’s firms, Tesla and Neuralink, are under scrutiny. According to PBS, California regulators claim that Tesla has been unfairly treating its black employees.

Additionally, according to the Guardian, Musk’s business Neuralink, which develops artificial intelligence, is being accused of abusing monkey test subjects by putting them through painful operations.

Musk is perhaps better known for his social media antics, such as his recent botched attempt to purchase Twitter and unfounded memes claiming that he is purchasing Fortnite to remove it and spare “these kids from eternal virginity,” as claimed in a fake headline Musk posted to r/funny and tweeted back in 2018.

Is Elon Musk Buying And Shutting Down ‘Fortnite’?

He’s, not at all. Given that Musk merely tweeted a phony story and statement four years ago, the majority would think this right away. To clear it up and rescue the kids, Musk hasn’t made any hint that he’s buying Epic Games or Fortnite, in case anyone missed the meme memo.

Had to been done ur welcome pic.twitter.com/7jT0f9lqIS

For those who are unfamiliar, Fortnite is an online shooter in the style of a battle royale where players build and fire their way to the finish line. Fortnite’s first release in 2017 was met with rapid popularity among a variety of gamers because of its exploitation of licensed characters, special occasions, and an all-around focused gameplay loop.

However, Fortnite has also occupied that peculiar position where it is simultaneously one of the most played games online today and is also generally despised for its free-to-play approach, marketing, and repackaging of beloved media figures.

Additionally, others claim that it is harmful simply because it appeals to a younger, apparently less ardent audience. The Elon-Musk-bought Fortnite meme has persisted for four years as a result of the gamut of fair criticism to general petty gamer toxicity toward Fortnite. You are aware now.

How Did The Rumor Start Anyway?

We need to go back a few years to determine where the recent rumors first appeared. The game was from Season 1’s Chapter 2. The Black Hole swallowed the entire game, rendering it blank.

The only thing that could be found on the game’s social media accounts was an image of a black hole. At that time, several jokes and memes began to circulate online. Eventually, a rumor surfaced that Elon Musk planned to purchase the game and permanently remove it.

Despite the increase in jokes, everyone was impacted by this particular rumor, and there was quite a commotion in the neighborhood. However, as soon as Epic released the following Chapter following the break, things started to shift. 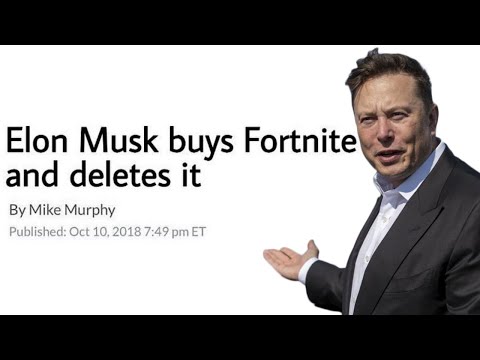 Someone just started dredging up the previous controversy, which rekindled the flames. Once again trending, the specific subject, gamers immediately began to believe the rumor. However, since the rumors are untrue, there is no need for anxiety.

The power of rumors to instantaneously mobilize the entire community is startling. Loopers are warned not to believe anything about the game unless Epic Games makes an official announcement.

Elon Musk is a multibillionaire who is known all over the world for his innovations. The inventor has done well in almost every field he has worked in. So when the rumors started to get stronger, people in the community started to worry more.

Stay connected with us on Leedaily.com for more latest updates and related news