The release of Diablo 4 couldn’t have arrived soon enough. Since Diablo 3 came out exactly ten years ago, players have already delved into its hellish depths. Nothing new was added to the franchise with Diablo 2: Resurrected and Diablo Immortal’s fresh concepts were largely subpar.

However, Diablo 4 will launch in 2023 for the PC, PS4, PS5, Xbox One and Xbox Series X/S and it’s hoped that the game will provide demon slayers all around the world with a substantial original experience with a low microtransaction count.

Since Diablo IV appears to be nearly finished, there is a wealth of material available including expanded trailers and a complete class roster. You won’t have to wait much longer if you’ve been excitedly anticipating your next visit to the Sanctuary universe. Additionally, there should be just enough time for you to catch up if you have never played a Diablo game before.

Although a precise release date for Diablo 4 is still unknown, we do have a reliable window: 2023. Blizzard revealed that the release of Diablo 4 would take place in 2023 at Microsoft’s Xbox Showcase in June 2022.

The current delivery timeframe gives Blizzard till December 2023 to release the game, however, it’s still feasible that they might postpone it in the interim. That period sounds realistic, especially in light of how long it has already been under development.

Like its predecessors, Diablo 4 won’t be a one-and-done experience. In the years to come, Blizzard intends to support the game with both story expansions and competitive multiplayer seasons. The game’s post-launch plans, though, won’t be revealed for at least a few more months.

For Diablo 4, Blizzard has revealed five playable classes. To a greater or lesser extent, they’re all remakes of earlier games:

Seven classes were available in both Diablo 2 and Diablo 3 although the final two were added through expansions. Both games had five playable character options when they were launched.

Positively, character-building will be a little more involved than in some of the earlier games. A male Rogue or Sorcerer is entirely possible this time around since players will be able to select a character’s sex and alter their looks. The game will have skill trees, just like previous Diablo games, allowing players to further customize their avatars as they advance in the game.

Due to the significant online component in Diablo 4, Blizzard will provide beta tests to test the game’s multiplayer components. The beta tests, however, are still a ways off, according to Blizzard’s official support website.

You can add your name to a mailing list for beta updates even though you can’t sign up for the beta just yet. By doing this, Blizzard will be able to reach out to you when beta chances emerge and you can decide whether or not to take advantage of them.

Diablo 4 is an open-world RPG, unlike previous titles. Diablo 4 will let players explore five regions instead of massive, isolated levels. If you play online, you can band up to combat evil in cooperative World Events or compete in player-versus-player matchups. As in prior games, you can play Diablo 4 with pals.

Diablo’s gameplay is straightforward for newcomers. You choose a character class, then enter Sanctuary to kill demons. Left-clicking (or another face button) is your special attack.

You must optimize your character’s talents and manage health and mana while you play. Most adversaries drop weapons, armor and gems that you can use to strengthen or customize your character. Easy to learn, hard to put down.

Since Diablo 4 has been in development for a while, there are several trailers to look through. You can find all of them as well as developer updates and promotional activities, on the official Diablo YouTube website.

The Developer Gameplay Showcase trailer which made its debut at Microsoft’s Xbox event in the summer of 2022, is arguably the best one to watch if you want a good overview of the game: 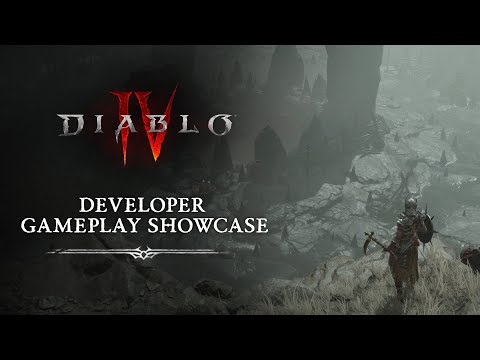 The open-world idea of Diablo 4 and some of the expected gameplay enhancements are covered in this trailer. To cover players that desire to play the game for hundreds of hours as opposed to dozens, it also goes into detail about some of the endgame systems.

Stay a while and listen as we update this page as we discover more about Diablo 4.