This is the biggest ask of gamers right now and everyone has their own set of theories to explain why did Shepherd betray 141? “Modern Warfare 2” is undoubtedly one of the highest-grossing games of recent times and ever since its release, it has earned a huge number of positive responses from the world of games.

The post-credits scene and the ending have left everyone spellbound but have also raised the curiosity among the fans, leaving them with a possibility of a sequel.

“Call of Duty” has a history of leaving gamers curious and intrigued for more. You might be wondering why did Shepherd betray 141? What is exactly going on during the “Call of Duty: Modern Warfare 2” ending? Well, just like the previous reboot of “Modern Warfare”, this time also MW2 players have left on yet another cliffhanger.

It looks like the makers are hinting heavily at the possibility of a “Modern Warfare 3” reboot and if it happens, the story elements will be taken from the original series. The curiosity grows more every day and players cannot stop but wonder, what was the reason for the betrayal? Why did Shepherd betray 141?

What happens in Modern Warfare 2?

Well before we get into the discussion of explaining our theory behind why did Shepherd betray 141? We should look at a quick recap of the main story. “Call of Duty Modern Warfare: 2022” follows the fan-favourite Task Force 141 and they are out on a quest to track US missiles that have landed in hands of a terrorist cell Al Qatala.

As the story goes, the event takes place three years after the events of the first reboot and here also the CIA supervisor Kate Laswell guides the team. This time, however, she is not alone as she has General Shepherd working with her.

With progress, you will come across many characters such as Colon Alejandro Vargas, Shadow Company, and more. Why Shepherd betrayed 141 is still unanswered by the creators but halfway down the story, we get to see the real intentions of Shepherd, hinting at the answer we have all been looking for.

How and Why did Shepherd Betray 141?

In order to answer the question of why did Shepherd betray 141, you will have to progress the story at least halfway. Here, Shepherd ends up recruiting Shadow Company, who is a PMC with specific responsibilities in the quest to retrieve the missiles. 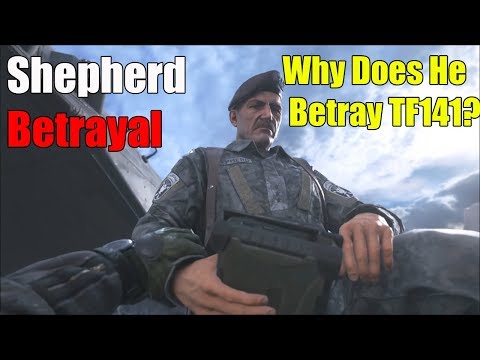 We see how Shepherd takes a whole different route in the mission but the question still looms large, why did Shepherd betray 141? Well, Shepherd wanted to take revenge for the 30000+ Marines he lost to Makarov in the Middle East. A WMD was used by Makarov to carry out the attacks.

Shepherd also wanted to become a War Hero and as Task force 141 was getting closer to uncovering the true treachery of Shepherd, he chose to betray them and have them removed. In the retrieval of DSM, Shepherd sets out on the mission to hunt down Makarov and establish himself as a War Hero.

“Modern Warfare 2” like most of the “Call of Duty” series has earned a huge reputation and love. The trajectory of the story travels in different directions, causing unforeseen events. Why did Shepherd betray 141 was the most asked question as fans couldn’t believe that Shepherd could ever do such a thing. But now that you know why Shepherd betrayed 141, are you more excited for the next edition of Call of Duty?

We should quickly go over what’s going on in the main story. In “Call of Duty: Modern Warfare: 2022,” fans’ favourite Task Force 141 is on a mission to find US missiles that have fallen into the hands of a terrorist group called Al Qatala.

This is all about in this post if you want to know more details then you can visit our site Leedaily.com.