Long back, when Realme came into the Smartphone market, nobody would have imagined it could become such a big name on its own. Today realme shares a significant portion of this market and is widely preferred by smartphone enthusiasts. The company is all set to launch its brand new mid-range Realme GT Neo 2 sooner than you think, and here’s what we need to know.

GizNext and OnLeaks’ leaked renders of the GT Neo 2 reveal that it will have a triple-camera arrangement on the back. Besides the two main camera cutouts, a tiny third slot could be for a depth sensor or a macro camera. Additionally, the smartphone will have a dual-LED flash arrangement. It will house a 64MP primary camera, an 8MP ultrawide sensor, and a 2MP macro camera in the triple-camera arrangement on the rear. Likely to be a clone of Realme GT’s camera sensors (Review). Facetime and video conversations are made easier with a 16MP front-facing camera.

According to the new Realme GT Neo2 renderings and leaks, the phone will sport a selfie camera cutout on the top-left corner of the phone and low cut bezels. Recently, a new gradient design in Blue colour hue has been featured on the device, and it’s making people mad. The right side of the frame has a power button, and the left side has volume keys, as usual. A USB Type-C port on the bottom edge, a speaker grill and a primary microphone chamber. To reduce background noise when recording movies, a single innovative microphone is located on the top of the device. There should be a fingerprint sensor beneath the display; that’s what we are hoping for. 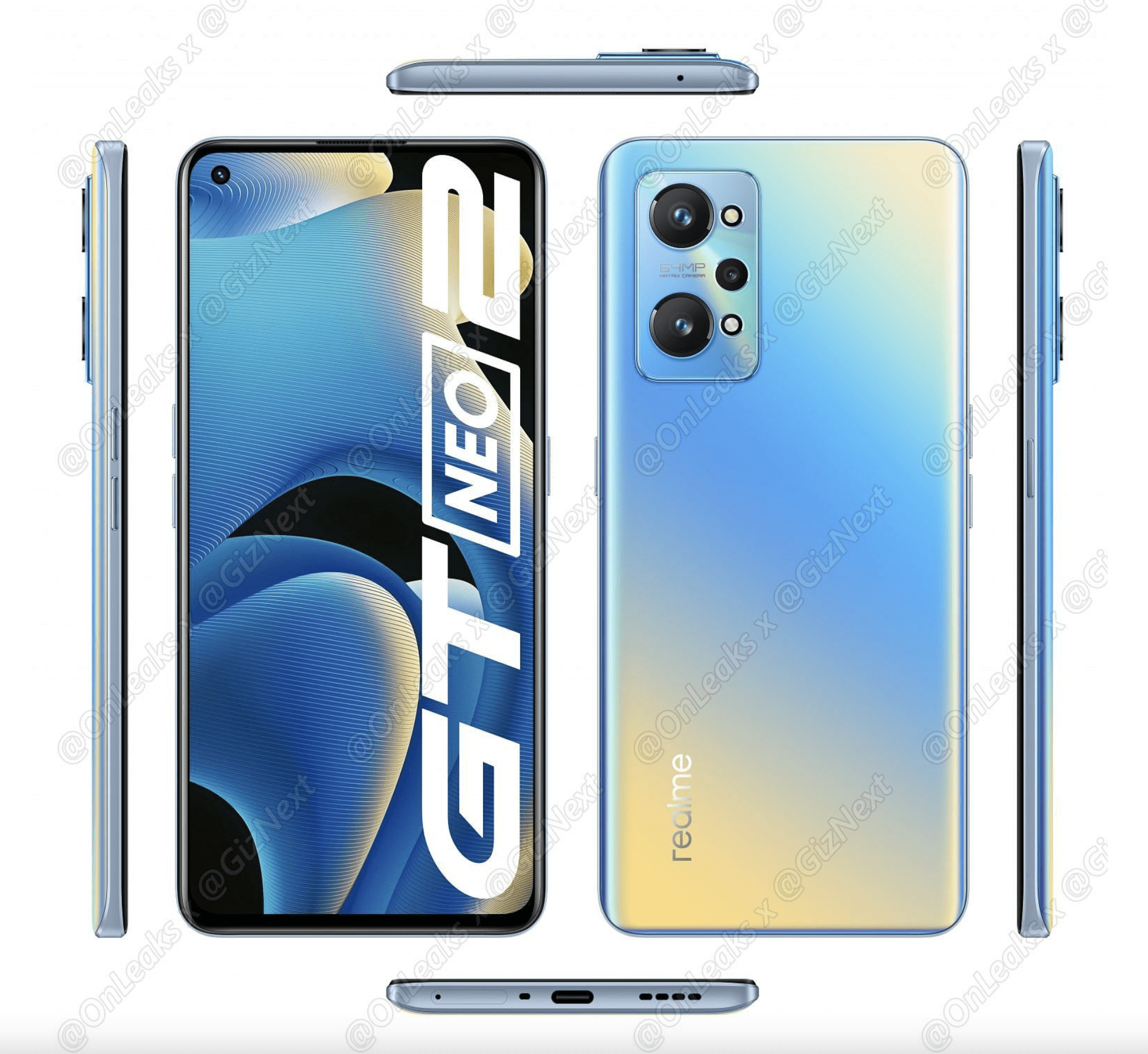 Do you get an SSD card slot in neo 2? No! It will not come with any slot like this, and it seems like Realme has made foolproof plans to get rid of SSDs, no matter how useful they are. The device will have Internal 128GB with 8GB RAM in variant 1 and 256GB with 12GB RAM in variant 2.

As per reports, WLAN Wi-Fi 802.11 a/b/g/n/ac/6, dual-band, Wi-Fi Direct, hotspot are inbuilt in GT Neo 2, similar to the company’s older phones. Bluetooth connectivity will be 5.1, A2DP, LE, and apt-X HD. Do we Get GPS Connectivity? Yes, with dual-band A-GPS, GLONASS, BDS, GALILEO and QZSS. Surprisingly there is no Radio option this time.

It is the factor we all are interested in! The all-new Realme GT Neo 2 launches with a powerful Li-Po 5000 mAh, non-removable battery with Fast charging 65W. Unlike the GT Master, the Snapdragon 888, and other GT series phones, I’m guessing this phone won’t be protected by Corning Gorilla Glass. For some, this would be a bargain.

As far as the present time is concerned, only two colours have been confirmed by the leak reports. One is a basic black, which we all adore. And for the creative ones, the Realme GT Neo 2 will also launch in a gorgeous gradient blue.

According to the company, the phone is a mid-range phone for consumers who want to save money. Prices for the GT Neo 2 smartphone in India are expected to start at Rs 18,313. The mentioned pricing is an estimate, and we won’t know the final price until the official launch takes place in the future.