It was a matter of concern that disturbed Joe Biden’s presidential campaign: Could a 77-year-old man, who at the age of 78 would be the oldest person ever to become the president be able to manage the difficulties with which job comes with?

Candidate Biden had admitted that it was appropriate for Americans to raise a concern about his health for office.

Biden on Questions About His Fitness

During the 2020 campaign, he told voters that “The only thing I can say is to watch. Watch! Check my energy level, determine whether I know what I’m talking about.”

Now, after nearly one year into his presidency, on Friday, Biden has come in for his first physical at Walter Reed National Military Medical Center in Bethesda, Maryland as president.

It came just before the day he turned 79.

Soon before he came, the White House disclosed that for a few of the tests he would be under anesthesia and would concisely transfer rights to Vice President Kamala Harris.

Further, she added that “As was the case when President George W. Bush had the same procedure in 2002 and 2007, and following the process set out in the Constitution, President Biden will transfer power to the Vice President for the brief period when he is under anesthesia. The Vice President will work from her office in the West Wing during this time.”

The White House stated that it sent letters at 10:10 a.m. to House Speaker Nancy Pelosi and Senator Patrick Leahy, president pro tempore of the Senate, to convey to them that Biden was going under sedation.

After the vice president, the House speaker is second in line to the presidency, and in line, the third one is the president pro tempore of the Senate, under the 25th Amendment setting out the order of presidential succession.

Psaki’s tweet mentioned that Biden had a conversation with Harris along with Ron Klain who is the chief of staff at around 11:35 a.m., stating that “@POTUS was in good spirits and at that time resumed his duties.”

About the Temporary Transfer of the Powers and Duties of the President of the United States, a letter has been sent to the Speaker of the House. 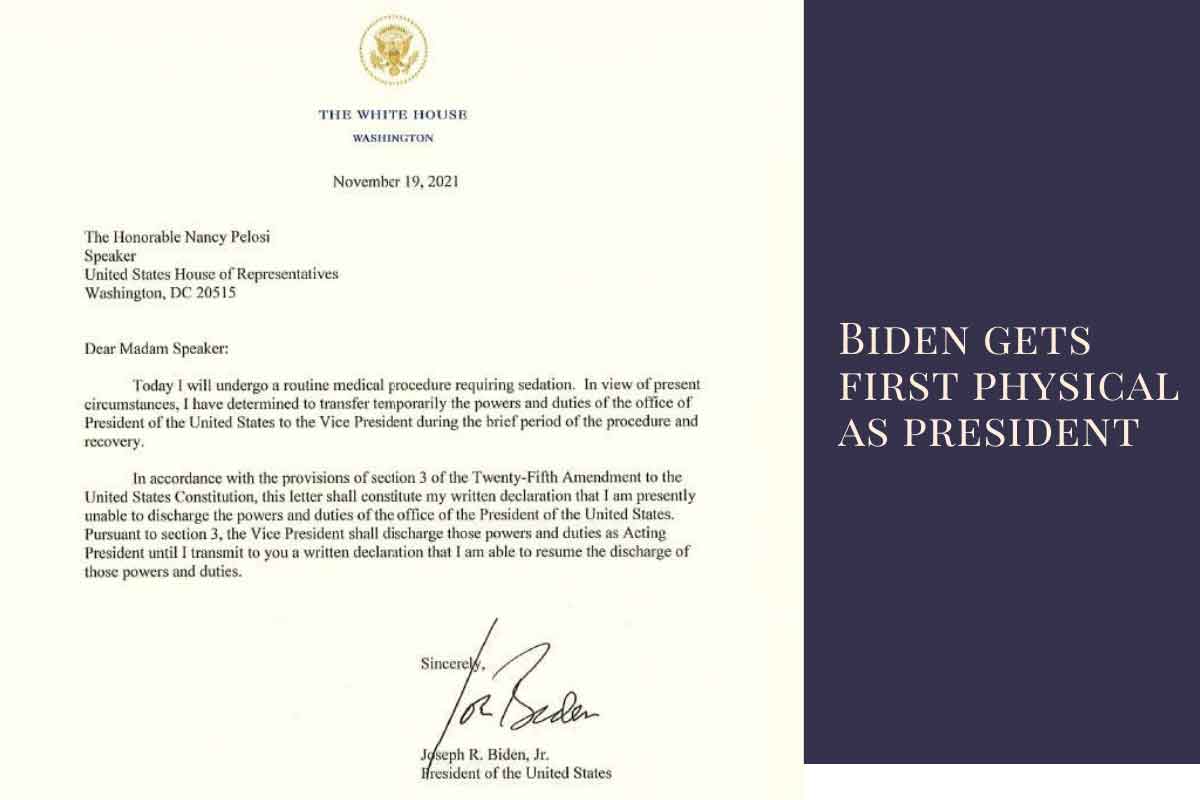 The president’s physician, Dr. Kevin O’Connor wrote that “Biden is a ‘healthy, vigorous 78-year-old man,” who is “fit for duty” and “fully executes all of his responsibilities without exemptions or accommodations,” whilst Biden got a report free from any health issues, O’Connor, who has been Biden’s doctor since 2009, mentioned that two definite observations: his constant and frequent throat clearing, and a stiffened gate, in comparison to last year.

O’Connor wrote that “The president has exhibited increasing frequency and severity of “throat-clearing” and coughing during speaking engagements,” adding “He has exhibited such symptoms for as long as I have known him, but they certainly seem more frequent and more pronounced over the last few months.”

O’Connor noted that Biden, being president, and the extra attention may lead to the identification of the symptoms, but ensuring that of course requires additional examinations. However, in the end, O’Connor stated that his preliminary assessment that “gastroesophageal reflux” was a result of the cough still he has.

‘Behind the Table’: A Special Podcast Series From ‘The View’

Coming to his stiffened gate, the doctor claimed that Biden admits that in the morning he becomes stiff and the issue improves by the time. O’Connor claimed that following several tests, general “wear and tear” of the spine partially can be a reason behind this issue to blame, although it does not require any diagnosis.

“Mild peripheral neuropathy in both feet,” was something new detected for Biden

O’Connor wrote “He did not demonstrative any motor weakness, but a subtle difference in heat/cold perception and great toe proprioception could be elicited,”, stating that, along with the wear and tear could lead to the stiffened gate, and “Physical Therapy and exercise prescription will continue to focus on general flexibility and proprioceptive maintenance maneuvers.”

The report said Biden’s usual screening colonoscopy discovered a 3mm benign-looking polyp was spotted in the ascending colon and was taken out without any difficulty.

To date, the recent physical and medical report were one his campaign issued in December 2019: a three-page extract that mentioned Biden “a healthy, vigorous, 77-year-old male, who is fit to successfully execute the duties of the presidency.”

At the time, Biden was told to undergo diagnosis for four different issues: non-valvular atrial fibrillation, a type of irregular heart rhythm; hyperlipidemia, higher concentrations of fats or lipids in the blood; gastroesophageal reflux and seasonal allergies.

In Biden’s past, the most significant health incidents were the two cranial aneurysms he went through in 1988.

Since he won the presidency, Biden went through a foot fracture following he fell whilst running after his dog Major at his Wilmington, Delaware, home last Thanksgiving. He was bound to wear a walking boot for the recovery from the fracture and was said to be “healing as expected,” as per scans from a routine appointment in December.

Soon after taking the office, Biden appointed O’Connor as his White House physician.

He has worked as a primary care physician of Biden and was also appointed as a physician in 2009 for the then-vice president. According to a statement of the White House official, the reason behind choosing O’Connor for the new role was their long past and personal bonding.

Not only Biden is in line who was questioned about health

Concerns about fitness for office are far from exclusive to Biden, before Biden, President Donald Trump, who was the oldest elected president, also combatted such questions regarding his mental and physical fitness.

In January 2018, Trump put up with particular scrutiny for the first physical under his presidency, which Dr. Ronny Jackson, who was his then-White House physician, stated went “exceptionally well.”

He came under fire for his effusively rosy outlook on Trump’s health while briefing reporters afterward.

Physicals have usually been led within a president’s first year in office.

In August 2001, President George W. Bush got physical, and was stated “fit for duty” with “every reasonable expectation that he will remain fit for duty for the duration of his Presidency.”

In February 2010, President Barack Obama git his first physical in office only after a year into his presidency. He was also stated in “excellent health,” though doctors asked him to quit his smoking habit.

Psaki refused to elaborate on any moves Harris took at the time of her 85 minutes as “acting president,” but noted the moment’s historic nature at her news briefing Friday.

She said “I will leave that to her team to characterize.

I know that other people have been talking about this and a woman myself, I will note that the president, when he selected her to be his running mate, obviously knew he was making history that was long overdue in our view,” adding further “Part of that was selecting someone who would serve by your side as your partner, but also … step in if there was a reason to.”