Review Of The Logitech...

The Federal Reserve Bank of St. Louis states that student loan borrowers in the USA owe about $1.75 trillion in federal and private student loan debt as of August 2022. Student debt forgiveness was announced by President Biden on August 24.

The White House expects to cancel the balances of 20 million borrowers and lower the rest by as much as $20,000. Keep on reading to find out how student debt breaks down, who holds it, and how much borrowers owe.

A student loan may be processed by several different institutions. One institution originates your student loan, the second one owns it, the third one guarantees it, and perhaps and fourth agency services it. It can be challenging to track down which agency owns your student debt and how.

The type of loan you’ve requested also plays a vital role. In many cases, government and large institutions like international banks serve as lenders.

You may also take out other borrowing options at the banks or alternative lenders. Those consumers who live paycheck to paycheck often turn to emergency payday loans as a way to support their daily financial needs and cover urgent costs till the next salary day.

Once the loan is originated, it represents an asset that may be sold or purchased on the market. Conventional banks can sell the loans to other providers to boost their capital ratio and let them make even more loans. Local banks can sell loans for a higher price as all of them are guaranteed by the government and the risk of default isn’t transferred with the asset.

The following chart shows the percentage of Americans who owe student loans in each age group. As we can see, Americans aged 25 to 34 have the highest student debt. According to the New York Federal Reserve, 67% of student loan borrowers are under 40.

Black students and consumers aged 50 and older are among the fastest-growing categories of student loan borrowers. Seven percent of consumers are below the poverty line while the average income of families with student loans is $76,400.

How Does Student Debt Break Down?

U.S. student loan debt totals $1.75 trillion as of August 2022. Most student debt is held in large loans, but many borrowers have small loans to pay off. About 13% of federal student debt is held in loans with $20K or less but 53% of borrowers owe less than $20K. The experts from the Federal Reserve claim that 1 in 5 Americans hold student loans. About a third of borrowers owe less than $10,000 while over half of 45 million people with federal student loans owe $20,000. 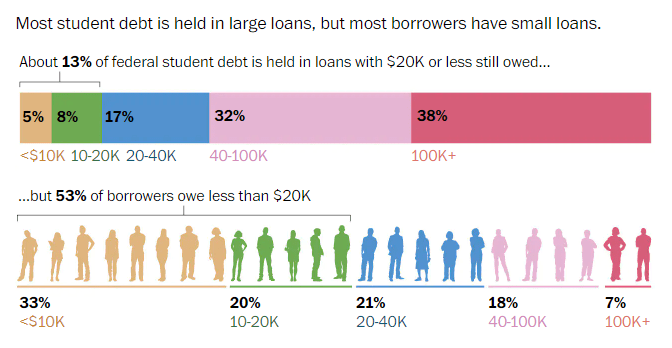 The most recent data from The Institute for College Access and Success proves that sixty-two percent of 2019 graduates owe student debt. The average student loan debt among these graduates with a bachelor’s degree was $28,950. The median U.S. family with student debt owes $58,957.

The average law school debt is $145,000 while the medical school debt is $201,490. Generally, 45 million Americans have some student loan debt today and the largest sum is owed by consumers 35 to 49 years old.

Here are some cohort default rates for loan borrowers who default on loan payments within a few years after they entered debt payoff.

Here are the applications which were approved for federal student loan cancellation:

The FAFSA is known as the Free Application for Federal Student Aid. This program is demanded to be eligible for scholarships, grants, work-study, and federal student loans. Those who complete this program are 84% more likely to enroll in postsecondary education straight away, mentions the National College Access Network.

In conclusion, student loan debt in the USA totals $1.75 trillion, with the average borrower owing $39,351. The government and international banks are most student loan, lenders. The federal government fully guarantees almost all student loans.

How Should A Payday Loan From Direct Lenders Work? PaydayPot Explains How

Can I Get Guaranteed Instant Approval For Payday Loans Online Even If I Have Bad Credit?