Joe Biden has promised exemplary reforms for America’s future. Citizens are anticipating the change as he continues his efforts with the new infrastructure bill and more formidable IRS reinforcements to target poverty and homelessness in America.

Biden’s vision seems quite dreamy to be a reality, and it has a vast set of obstructions in its way even before its implementation. The build-back better campaign will set the grounds for Biden’s hopes to generate a system where rich people’s taxes will be utilized for America’s infrastructure.

This campaign aims to reduce the gap between the rich and poor and allow people from less privileged backgrounds to make a future for themselves and break the chain. These changes seem pretty challenging, but president Joe Biden appears to be very determined and confident regarding his new campaign.

He believes that the nation only flourishes when people come together and serve together. Biden infers that a great nation is constructed of its people’s efforts, including financial assistance.

Anyone who can afford to provide financial aid should step forward in these times. With the same reasoning, President Joe Biden has decided to impose a book tax on all companies that report to their investors and are currently in successful positions.

Which Sectors Would Have the Advantages of Imposing Such a Book Tax? What Did Democrats Have to Say in Their Defense?

People who have a low income have always shown negative concerns about imposing laws that might increase taxes. But there are few people, including Elizabeth Warren of Massachusetts, Angus King of Maine, and Ron Wyden of Oregon who think otherwise.

These all three belong to the group of Democrats. Democrats are the ones who have proposed to introduce the book tax. It is commonly thought that increasing taxes with tougher reinforcement could not possibly benefit people.

However, according to democrats, namely Elizabeth Warren of Massachusetts, Angus King of Maine, and Ron Wyden of Oregon, this might help conserve and protect the different businesses, including research and development and clean energy. Apart from this, it might also assist companies in carrying forward their losses. 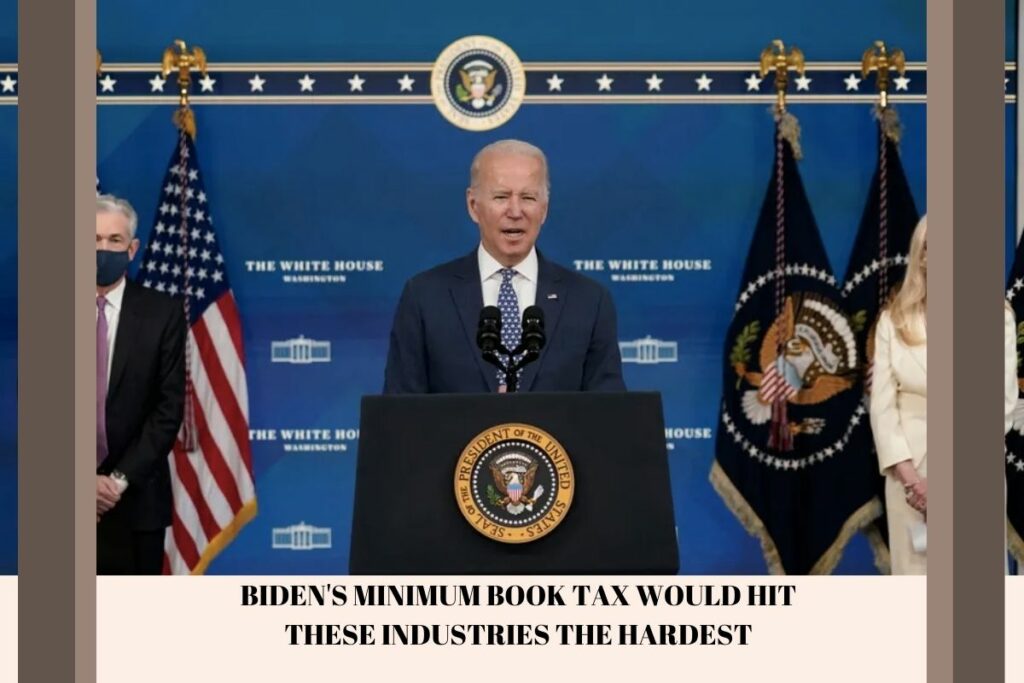 The media expressed their views on Biden’s new plan by saying that this prospect would help protect the amount of business debt. Moreover, this will include the research and development sector apart from the clean energy sector and mortgage debt.

The plan will also create certain corporate conditions to sustain the failures in finance, consume the international tax debt, and demand lower tax credit compared to average taxes in the upcoming year.

What Is the Actual Percentage of the Imposed Book- Tax? What Is the Fundamental Difference Between the Book-tax and the Regular Tax?

According to recent estimations, the imposed tax would be around 15% on the companies earning a considerable profit margin. As a result, these colossal business tycoon companies would have to pay a little bit more than the regular taxes.

It has been estimated that the minimum tax book income would be slightly more significant than the regular one. The book tax income is estimated to generate a hefty sum of $319 billion, which could be a great funding source for Biden’s climate change campaign.

What Are the Prominent Pros and Cons of the Book-tax?

It has been reported that few people other than democrats saw this project to be beneficial. According to the democrats, this project will limit tax evasion by large corporations and ensure that high-profit companies pay higher income taxes.

They also assume it will make tax debt more clear to shareholders. However, no one would be convinced to pay their taxes, especially those getting highly high profits. Focusing on large corporations avoids raising taxes on many businesses and may separate business community members from policymakers.

The tax foundation has analyzed that there are several undertones of the proposal which cannot be adequately forecasted and create uncertainty regarding the consistency of tax policy goals.

Lawmakers should consider all the underlying issues before implementing more rigid tax reinforcements. Some opponents also argue that the best way to prevent substantial tax evasion is to limit or cancel certain tax benefits directly.