Three months earlier, Zabiullah R., who served as a combat translator for the 82nd Airborne in Afghanistan, had no idea about what would happen to him and his family following the withdrawal of the U.S. military.

Zabiullah Escape Kabul With the Help of a U.s. Senator and Others

Zabiullah, fondly called Johnny by troops and he managed to flee away in August from Kabul, after a U.S. senator, a group of private veterans and members of the 82nd Airborne helped him out. Back in October, Johnny came in with his family at his new North Carolina home.

Today, his little daughters are already obtaining such a thing that they never had an opportunity to get under the Taliban, and that thing is education.

Johnny said “They’re happy and they’re excited,” adding further “Every morning … 6 a.m., my two daughters, they wake up and get ready … just come into my room and wake up us.”

Johnny states that his daughters request to go on weekends.

Johnny said “I tell them, like ‘two days off, you have to stay home,” adding further “They keep asking, ‘We want to go to school, we like school. We have friends back at school. We want to play with them. We want to meet them.’

The New School and North Carolina Welcomed the Afghan Family

The young girls have been greeted well at their new school in Weddington, North Carolina, and received support from the community, where several soldiers Johnny once served in company with now stay.

In expectation for Johnny, his wife, and his three daughters; students and families at Rea View Elementary school waited with hand-made signs and wishes written in Dari. 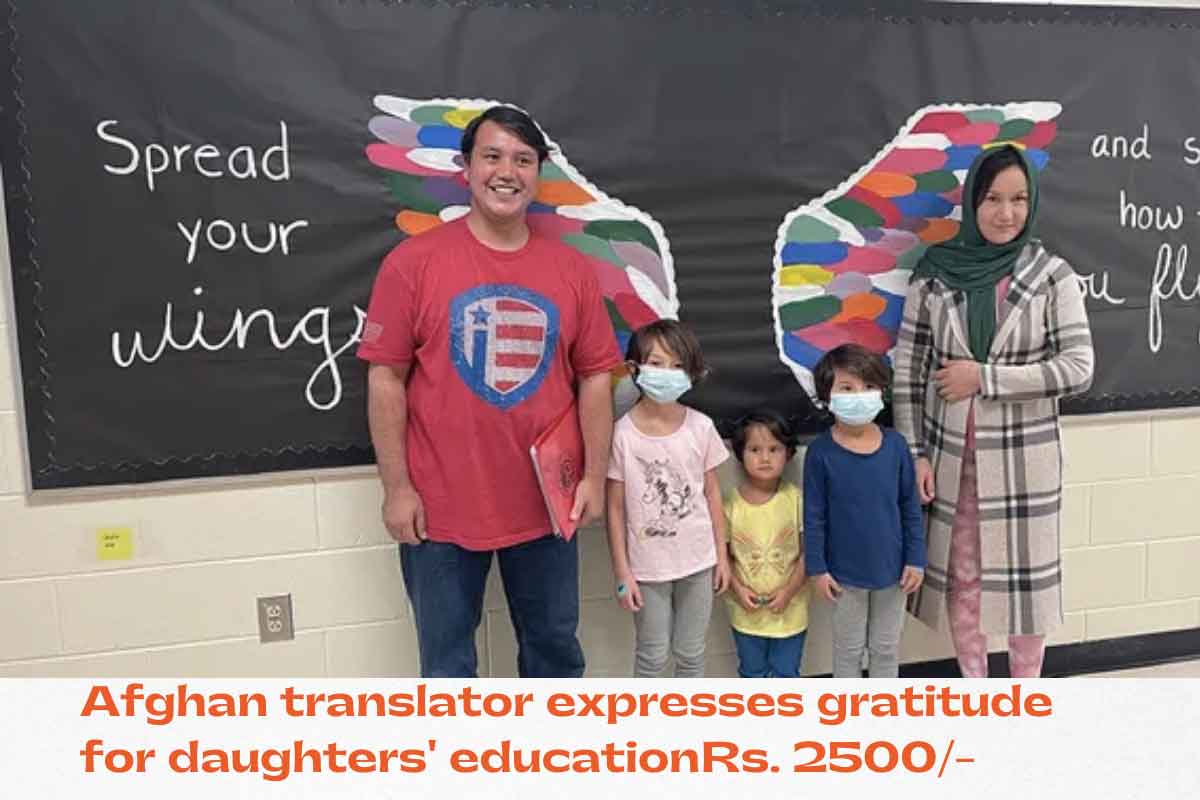 Jennifer Parker, principal at Rea View Elementary School recalled “The moment they pulled up, it got to be so quiet like you could hear a pin drop. And the girls get out of the car, and they walked up, and, of course, they were smiling, beaming ear to ear,” adding further “And my families and kids just were waving and saying hello in their native language.”

The girls play soccer on the same team as the daughters of Sgt. Mike Verardo and his wife, Sarah.

Johnny served as a translator for Verardo, who lost his leg in Afghanistan’s Arghandab Valley in 2010 and went through a painful brain injury.

Mike has sustained over 100 surgeries at Walter Reed after he served at the 508th Infantry Regiment, an airborne infantry regiment of the United States Army, first created in October 1942 during World War II. Johnny and Mike, both have three daughters each and now, they are neighbors, also their daughters are best friends.

Sarah Verardo, Mike’s wife and CEO of The Independence Fund and Co-Founder of Save our Allies said “Seeing our six girls play together, six little girls whose dads served together, shoulder-to-shoulder in Afghanistan, has healed all of our hearts a little bit more each day,” adding “These children are an example to all about what it means to love all people.”

Their daughters went trick-or-treating for the first time and now have play dates following school.

Johnny said “That was the first Halloween in the United States. They were so excited,” adding “They went to the Halloween party and house-to-house to meet other kids and families.”

Mazda and Muzhgan were not even able to speak a word of English when they came in at school.

Parker said “Google Translate doesn’t have Dari on it, so it’s been an experience with that. So, a lot of hand gestures, pictures. I feel like we’re playing a game of charades daily.

Parker recalled her first sentence “‘I like pizza. Yes, Muzhdah loves pizza.” Parker states that nothing has been ever taken for granted by Muzhdah and Muzhgan.

Parker said “Sometimes kids are like, ‘Oh, I don’t feel good, I don’t want to go to school.’ And to them, it’s such a privilege. And so, getting to come into school every day and learn, especially as a girl, they are just so excited and are little sponges,” adding further he continued “We talk a lot about gratitude and especially this time of year. This truly exemplifies how grateful that family is.”

Johnny states his girls are enjoying the freedom they newly found. Johnny said “A hijab … [Muzhdah] said, I’m not going to do that. I want to be freer. I’m going to live in freedom.”

This year’s Thanksgiving an Afghan family has come up with lots of joy to this North Carolina community who welcomed them with all their heart and supported them to begin their new life in the U.S.