The President of the United States, Joe Biden, meets Pope Francis at the Vatican on Friday. The Pope tells him that he is a “Good Catholic” and should keep receiving Communion, though the conservatives doubt that

The Meeting of the Two Roman Catholics

Joe Biden met Pope Francis and had an extensive and highly personal chat with the head of the Catholic Church. Biden, along with the first lady Jill Biden, returned to the Vatican City on Friday and had a 90 minutes talk session with the Pope who has always provided the necessary ideological guidance to the President. 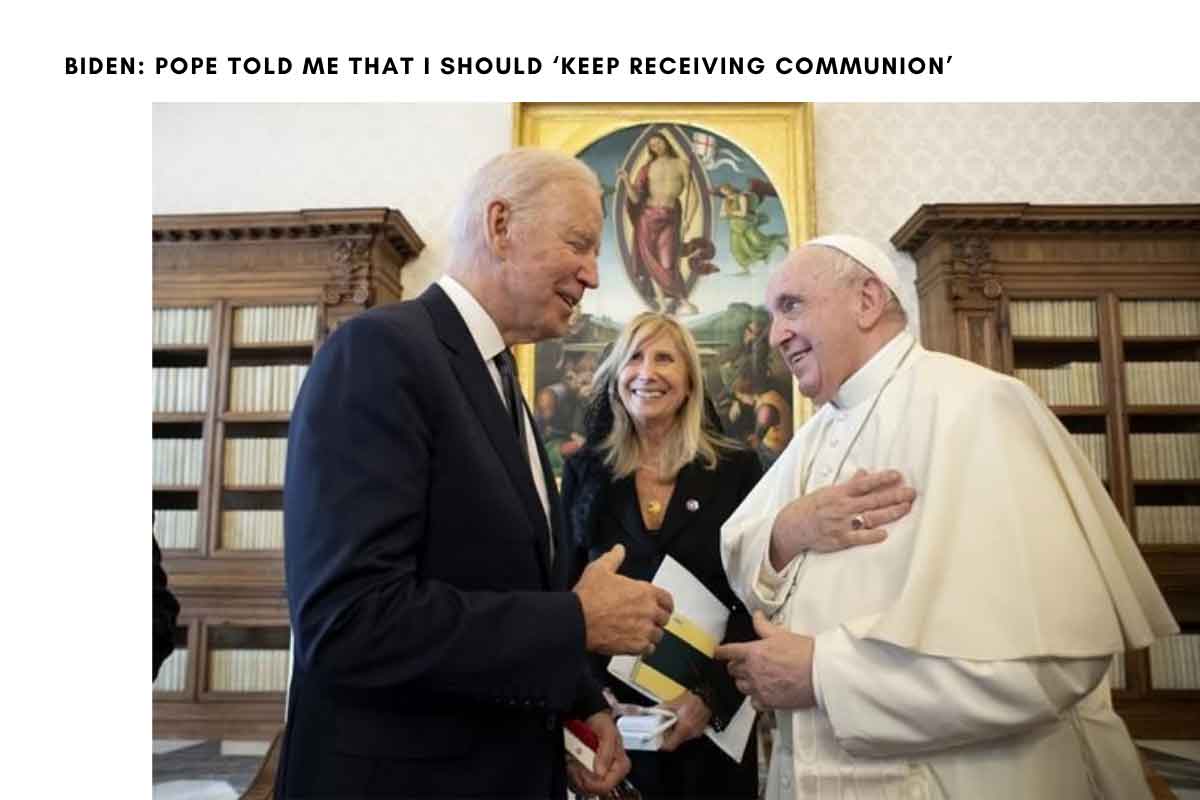 The two men sat at the desk across from each other at the Papal Library, accompanied by a translator. The Pope’s faith has always promoted Biden’s public and private life. He says that apart from topics like the Coronavirus pandemic and climate change, he talked a lot about his personal life.

Manchin Says Everyone in U.s  Who Has Been “blessed and Prospered” Should Pay a “patriotic Tax”

The meeting time was twice as much as the meeting of the young Biden with Pope John Paul II when he was a senator. Although the meeting had a very political influence on it, the President demonstrated a familiarity with the Pope. The two Catholics who rose to power very late in their lives even joked about aging well.

Biden says that the lengthy meeting with the Pope was “wonderful”. The White House said that Biden thanked the pope for his advocacy for the world’s poor and those suffering from hunger, conflict, and persecution.

Biden also said that the Pope’s leadership in fighting the climate crisis, as well as his advocacy to ensure the pandemic ends for everyone through vaccine sharing and an equitable global economic recovery”, is worthy of his praise.

The Vatican said that the two discussed the care of the planet, health care, the pandemic, refugees, migrants, and protection of human rights, including freedom of religion and conscience. The private meeting with the Pope lasted for 75 minutes and the other 15 minutes were spent taking pictures and exchanging gifts in presence of the first lady.

Biden said that the topic of “abortion rights” did not come up during the conversation. Out of all the topics, the men discussed climate change and COVID 19 pandemic at length.

What Do the Conservatives Have to Say?

Pope Francis told the President that he is a “Good Catholic” and he should keep receiving Communion, a rite where bread and wine are consecrated and shared. The conservative Bishops do not agree with the Pope because of the President’s support towards abortion rights.

The president’s support for abortion rights and same-sex marriage has put him at odds with many U.S. bishops, some of whom have suggested he should be denied Communion. The conservatives say that abortion is “murder ”.

Biden, Beau, and The Pope

Beau Biden, the eldest son of the President of the States, lost his life fighting with brain cancer at the age of 46, in May 2015. The Pope counseled the mourning family privately in the months following his death. Biden says that it was his faith that pulled him out of the extreme grief.

In the meeting with the Pope, Biden gifted a coin to Francis which held a very deep personal significance. The coin bore the insignia of the 261st Signal Brigade, the Delaware National Guard unit in which his late son Beau served as a captain.

The President told the Pope that the coin is awarded to warriors and that the Pope is “the most significant warrior for peace I have ever met” and that he knows that his late son would want to give it to Francis.

The meeting of the Pope and the President of the States had a very strong sense of familiarity to it. Biden, who himself wanted to become a priest after the tragic death of his wife and daughter, tries to maintain a very good relationship with the spiritual community and his attendance to churches and the Mass shows that he is “A Good Catholic”.