The Lakers’ star and one of the greatest players of basketball, LeBron James gets ejected from the game against Detroit Pistons after he accidentally hits Isaiah Stewart during a free throw which led to a brawl.

The Match and the Brawl

It all started after three minutes of the third quarter of the match between Los Angeles Lakers and Detroit Pistons when LeBron James’ elbow accidentally came in contact with Isaiah’s face while the two contested for a rebound.

Piston’s big guy stumbled backward and his face started to bleed. James went to apologize but Isaiah stood back up and charged on LeBron.

The players from both teams then came in to stop the fight from getting any much worse. The Pistons’ star was taken away by security and players but he got loose and charged at James once again before both the players were sent back to their lockers. The Lakers went on winning the match by 121-116.

As a result of the fight, both the players were sent off the floor. Stewart was initially charged with a loose ball foul that was followed by a dead ball act by LeBron. After repeated attempts to get back to James, Stewart bagged multiple technical fouls. 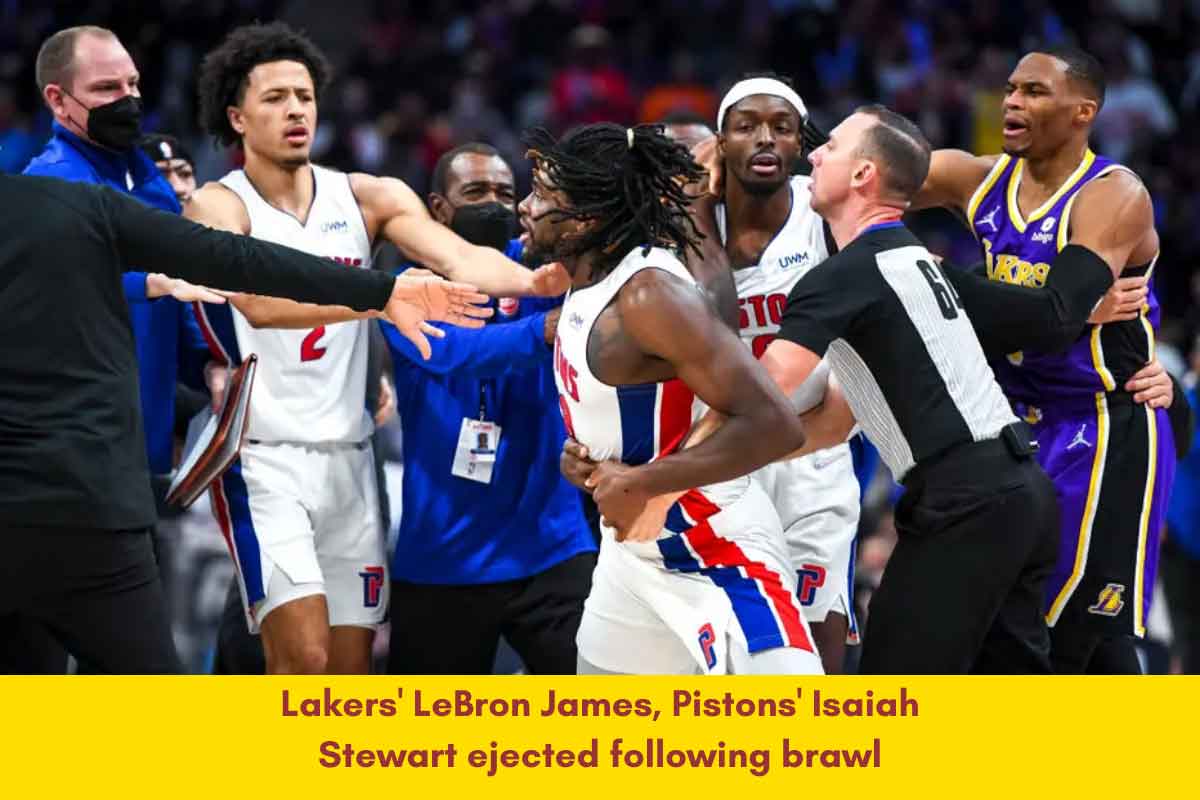 James was also charged with a flagrant 2 for excessive and unnecessary contact by the shoulder. He was thus ejected from the game. During the fight, Wilson’s unsportsmanlike attitude resulted in two technical fouls for him.

Russell Westbrook, the Lakers’ guard also got a technical foul as he was found provoking and trash-talking during the fight and not making any attempts to end it.

James Being Sent Off for the Second Time

This is only the second time that LeBron James was sent off of the floor in his 1,318 appearances in regular games. He was first ejected in 2018 when he was given a technical foul by referee Kane Fitzgerald for arguing a non-call in a game against the Miami Heat.

The young James was a part of the Cleveland Cavaliers at that time and was dismissed for throwing an air punch at Fitzgerald. He then charged at him and verbally assaulted him. LeBron did not talk to the media after the game but his teammate and NBA star Anthony Davis stepped in to cover for him.

Davies said that everybody already knows that James is not a dirty guy and that the Lakers’ star immediately apologized to Isaiah after he accidentally hit him. Davis also praised the players and security for keeping the peace and avoiding a big mishap.

Malice at the Palace Flashbacks

The LeBron Isaiah fight gave flashbacks of the most infamous brawl of NBA history, the Malice at the Palace incident of 2004. Ben Wallace of the Detroit Pistons and Ron Artest, Stephen Jackson, and Jermaine O’Neal of the Indiana Pacers were involved in the incident.

Ron Artest fouled Ben Wallace as he attempted a layup after which Wallace shoved Artest. This resulted in a brawl which was soon going to get out of control. When a fan tossed a drink at Artest, he jumped into the seats and attempted to punch him.

Artest was suspended for the rest of the season, while teammates Stephen Jackson and Jermaine O’Neal were suspended for 30 and 25 games respectively, for fighting with fans. The fight between LeBron and Isaiah did not progress so far but it still reminded the NBA fans of the day.

The two teams will take on each other again next Sunday in Los Angeles.