In early November, U.S. consumer sentiment incredibly broke down due to increasing concerns of Americans about increasing prices and the inflationary effect upon their funds.

As per data released on 12th November, the University of Michigan’s preliminary sentiment index fell to 66.8 from 71.7 in October. The November figure ran down all anticipations in a Bloomberg survey of economists that forecasted a rise to 72.5.

No Effective Policies Have Been Developed Yet to Reduce Increasing Inflation

According to a statement made by the survey director Richard Curtin, Waning confidence depicts “an escalating inflation rate and the growing belief among consumers that no effective policies have yet been developed to reduce the damage from surging inflation.”

Curtin said, “One in four consumers cited inflationary reductions in their living standards in November, with lower-income and older consumers voicing the greatest impact.” 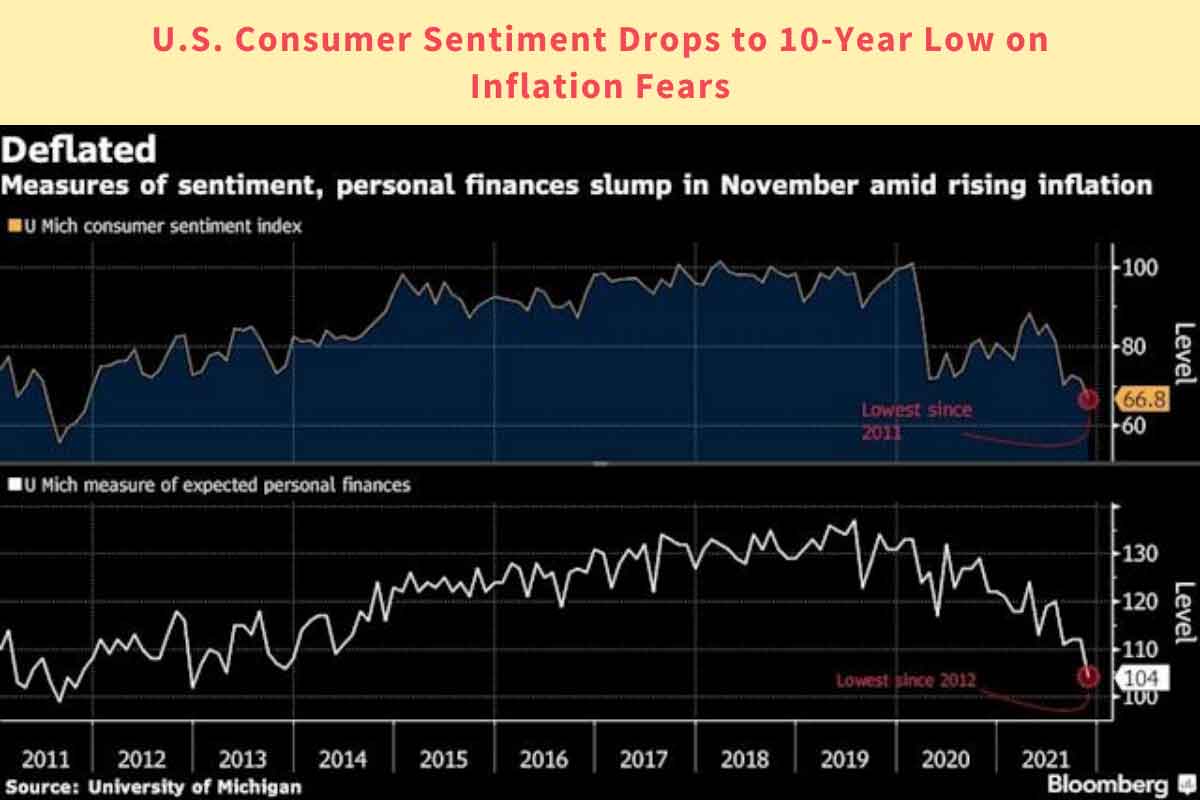 According to the data, nearly 50 percent of the families expect declines in inflation-adjusted incomes over the next year. The sentiment figures are based on the government data previously in the week that depicted the highest yearly inflation since the last three decades.

Whilst the consumers are getting more anxious about the effect on purchasing power due to inflation, family spending reflected signs of progressing during the end of the third quarter.

In a note, Bloomberg economist Eliza Winger said “Looking ahead, the risk is outsized, persistent price rises feed into the consumer-inflation psyche,” adding further “In the near term, shortages and prices should restrain inflation-adjusted spending.”

Earlier this week, in a statement, President Joe Biden said that taking into account the increasing inflation is a top priority since he goes through reducing approval ratings.

The Michigan figures reflected a steep divide along partisan lines. Sentiment in between Republicans dropped 17 points to the lowest on record whereas it slipped 5.3 points for Democrat respondents.

The Michigan report depicted the purchasing power for household goods has deteriorated widely, with a gauge getting to a reading of 78 that was the second-lowest in data back to 1978. There were repeated mentions in the survey of higher costs for vehicles, durable goods, and homes.

According to Curtin, 24 percent of families believe it will worsen by the coming year which is the highest since June 2008.

Owners of CNY Donut Shops Found Guilty of Not Reporting Over $2.8 Million to IRS

Concerning the economy’s prospects over the coming five years, Americans also are more hopeless. The university’s gauge decreased to the weakest since 2011.